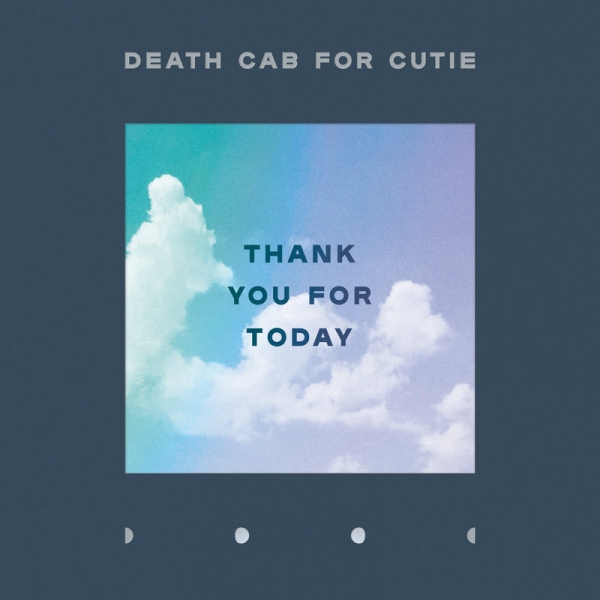 Death Cab For Cutie’s ninth studio release Thank You For Today continues in the same style from their 2015 release Kintsugi, but with a more kaleidoscopic, synth-heavy and introspective edge.

Thank You For Today is the first Death Cab For Cutie release that sees long-time members Ben Gibbard, Nick Harmer and Jason McGerr joined by new members Dave Depper and Zac Rae. These two may be officially new to the band, but they have been part of Death Cab’s touring band since 2015, and therefore are no strangers to the alt-rock veterans. They are also familiar with album producer and mixer Rich Costey, who also produced 2015’s Kintsugi. Perhaps it is this similar production that makes this album so familiar, despite line-up changes and zero input for the first time from long-time guitarist and producer Chris Walla. If Kintsugi was a small change in style, this album is a continuation of it.

New line-ups aside, all the elements of a classic Death Cab album are still present. Catchy lyrics that stick with you from first listen, discordant guitar strums and ocean imagery can take you straight back to feeling like a fourteen-year-old watching The OC, and making Death Cab the soundtrack to your teenage angst. Considering their debut album was twenty years ago, it’s no easy feat to keep dedicated fans for two decades and still produce such high-quality music, detailing first loves, heartache, anger, second loves, depression, long-distance relationships and more.

Twenty years from their first album and fifteen from what might be described as their seminal album, Transatlanticism, there is inevitable change – in the world around us and therefore in what Death Cab’s lyrics will focus on. The lead single of Thank You For Today is “Gold Rush”, potentially the biggest departure from a typical Death Cab sound so far. The track involves layered guitars over an incongruent piano melody. The vocals are layered too, as if Gibbard is trying to keep up with how much his beloved hometown Seattle has changed, telling anyone who will listen in a sorrowful and almost desperate tone. Luckily though, this song is able to portray that ‘back in my day’ message without it being a whiney middle-class lament. It’s more of a reflection, an observation, than anything else. Gibbard has to come to terms with how Seattle’s landscape has evolved, singing: “They’re digging for gold in my neighbourhood, for what they say is the greater good / But all I see is a long goodbye, a requiem for a skyline”. He reflects on locations like bars that hold memories for him: “Now that our haunts have taken flight and been replaced with construction sites / Oh, how I feel like a stranger here, searching for something that’s disappeared,”. Hauntingly, “Gold Rush” ends with the backing vocals whispering out “…stay the same, please don’t change…”. This could well be the message for the whole album.

More than ever before, Gibbard feels like the leader of this album. Some of the lyrics are more cold-hearted than they’ve ever been, and occasionally he snarls and sighs through songs. While Kintsugi was about heartbreak and long-distance relationships (perhaps fuelled by Gibbard’s marriage ending), this album is more about memory, transformation and reflection. “Autumn Love” is full of classic Death Cab mentions of oceans and lighthouses. But before, as Gibbard unforgettably vocalised on Kintsugi’s “Little Wanderer”, “…someone’s gotta be the lighthouse / And that someone’s gotta be me” – things have changed. He kicks off “Autumn Love” with “No more lighthouses to deceive me / Just leave me floating on the open ocean”. Familiar themes are explored here, but the perspective is a little different – Death Cab have been through it all and are now looking back from the other side. The dreamlike quality that encapsulates this album is particularly found in the opener “I Dreamt We Spoke Again”, “Summer Years” and “Northern Lights” – synthy harmonies blend together over ruminating and yearning lyrics. “Northern Lights” is given a bigger synth-pop feel as Chvrches’ Lauren Mayberry adds her high, trancy Scottish lilt to the song. Even the album artwork is dreamlike – fluffy clouds part in a purpley-blue sky, with mini moon phases below.

Thank You For Today is a blend of old and new Death Cab that could appeal to the mainstream – which isn’t necessarily a bad thing. You have Gibbard’s forlorn yet criticising voice, the personal yet accessible lyrics, the melodic yet clashing guitars, which all create an incredibly atmospheric record, brimming with nostalgia, defeat – and hope.