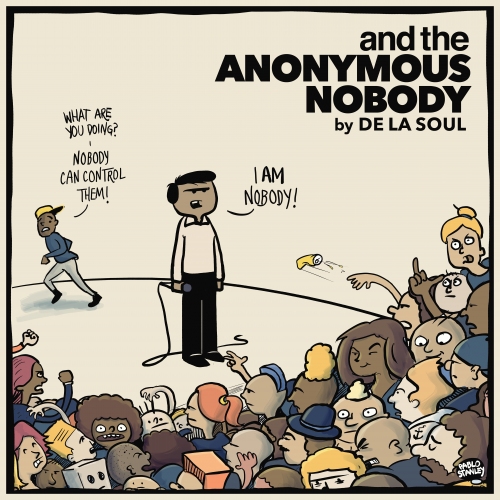 “True to our Hip-Hop roots, we make music without limits” say De La Soul in the statement released with the Kickstarter campaign, launched to fund their eighth studio album. But as a group whose career has been tied and tangled in the ever evolving laws of music copyright, they’ve never exactly been free.

Their debut 3 Feet High and Rising ingeniously stitched an eclectic selection of over 60 different records (from Johnny Cash to Parliament) into its 67 minutes of ground-breaking tracks underneath their light hearted pop-culture and in-joke riddled raps - playing them over and off each-other in such a way they were heralded as sparking a new era of hip-hop. This set a precedent for the group’s future work, demonstrating a love and undeniable talent for sampling and pop-culture pastiche that would drive the composition of their next few records.

But their innovative creative techniques have always come at a cost: from the court case surrounding their debut, in which the group were sued $1.7 million for the use of an un-cleared sample in "Transmitting Live from Mars"; to Warner Bros speaking out just last week about fears the trio’s back-catalogue may never be released through online platforms.

“Sampling is basically copying a piece of sound, from one recording, and reusing it to create a new recording. It is how De La has always made music” say De La. “So, unfortunately a huge part of our career has also been spent fighting off the ‘sample police'". Returning with And The Anonymous Nobody, De La Soul attempt to break past those limits.

Though they acknowledged it near impossible to match 3 Feet’s cultural significance, with their latest album De La Soul have set out to make another sample-based album in the vein of their debut. In order to do so without alerting the so-called ‘sample police’, this time around they’ve opted for a slightly different approach.

Seemingly sick of label restrictions and interference, the trio opted to crowd-fund the record rather than seek a deal. “For the last decade, we've been independent artists, free of a record label interfering in our creative process” they declared on their campaign page. Raising $600,000 from 11,000 funders it became the second highest funded project in Kickstarter’s history – a sum the group used to fund the recording, mixing, packaging, distribution and marketing - “the whole thing - we literally cannot do it without you” they said.

But that’s not the only way De La Soul have tried to break free. With a group of friends and studio musicians De La Soul recorded over 300 hours of original material from jam sessions at their beloved Vox Studios in LA on to tape, converging everything from bossa-nova, soul and hip-hop to funk, disco and reggae. Digging through the tapes for standout riffs, kicks and snares they stitched the base of the album together as De La Soul do best - with some 100% guilt free sampling.

There’s no doubt this technique has dressed And The Anonymous Nobody in unmistakable De La style. Recording the sessions to tape has given the sampled material a grainy, vintage warmth; looping and playing them back through MPCs has given the grooves a little bit of that early hip-hop wonkiness. The standout example "Pain", (featuring a smoothly executed verse from Snoop Dogg) has an irresistible bounce – with palm muted guitars and a big rubbery bassline stretched over a rocking kick and snare heavy groove. "Trainwreck" tightly slots a slap-bass line under boss-nova style cowbells and another catchy drum loop. But it’s a feel that flows throughout the album.

But while this kind of composition is the perfect legal and artistic solution to sampling – it lacks the cultural power of sampling existing music. A newly composed, unrecognisable instrumental sampled in a new piece of work doesn’t pack the same punch in terms of provoking cultural associations in the listener between the existing piece of music and its place as sampled material in a new piece of work. None of these original bass-lines, riffs or breaks carry the weight that Parliament’s "(Not Just) Knee Deep" did in "Me Myself and I".

That said, De La Soul still manage to capture that classic patchwork style that gave the production of their early releases so much contrast and colour.

With a song listing 17 tracks long, there are certainly going to be some who think there’s a few tracks that could have been left on the cutting room floor here – most likely a couple of the slightly sub-par collaborations. The creative relationship we’ve heard Albarn and De La Soul successfully explore before doesn’t quite peak with "Here in After". "Lord Intended", featuring a surprising slot from The Darkness’s Justin Hawkins, and "Snoopie", in which David Byrne offers a hefty touch of Talking Heads, both incorporate maybe a little too much of their guest artist’s styles breaking the albums flow a little.

But there are certainly more strong points than weak points to be concentrated on here. All the tracks that centre around Posdnuos, Trugoy and Maseo see De La Soul at full strength with their rhymes as sharp and playful but seemingly wiser than ever before. Alongside the aforementioned "Pain" and "Trainwreck", the intensely raucous "CBGBS" is short but oh so sweet, while "Sexy Bitch" and "Nosed Up" would both stand strong at anypoint in De La Soul’s twenty-seven yearlong discography.

While they may have had to sacrifice a little of what we love them for, there’s no doubt that this a satisfying, De La Soul-ful comeback from the Long Island Trio.