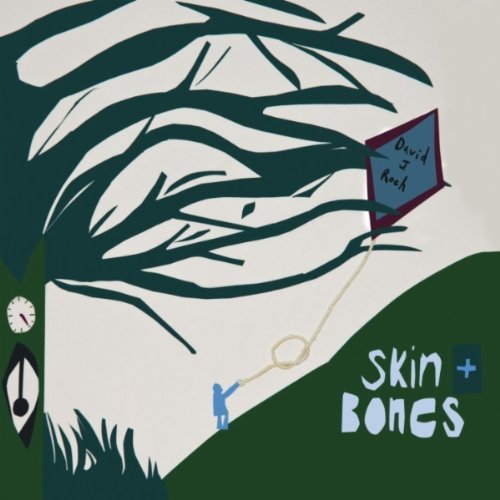 After a blighted early attempt at a music career with the band Curbar, David J Roch reemerged with a new moniker: Little Lost David – used as a perfect analogue to suggest him reaching out on his own. Now, for a third time, he appears before us with his given name, his final chrysalis-to-butterfly transformation, turning all that sore misery into something beautiful and vibrant.

Skin and Bones is the common link found between these two paths. From shaded, brittle vocals, either set deep in the mix or caught naturally on the peripheries of this affected sound, to production that revels in faded guitar and dampened snare hits, Skin and Bones creates a strange soundscape for the listener, spinning him into a world seemingly detached from this earthly reality. This detachment finds its way leaking into every part of the album and while its effects can ramp up the atmosphere at times it seems to detach the listener too.

And so while I sit here with the album on repeat, with the same moments producing the same exact stimulations, I am at a loss for what to write about it – nothing comes to me, just a cloud of uninspired thoughts.

This makes me wonder about the creation of the record. It seems in many ways to be so lovingly conceived as if to exist with a warmth all of its own. Yet it doesn’t make me warm to it – in fact it fails to make me feel much at all. The soundscapes are often monolithic and vast or delicate and frail, exacting the correct tones for the correct places, and, with the exception of the disastrous and amateurish chorus to ‘Evil’s Pillow’, the vocals work wonders. In fact Roch’s voice manages to mirror the fantastic production engaging, at times, in dynamic swords play between the two.

Considering all this, it leaves me with one thought left: that it must lack intellectual and creative honesty at its base. It doesn’t properly connect the art of creation, that romantic and illusory thing, with the ideas expressed through music; the solid base for experimenting. It must be a ghost, an apparition, residing within a real body. Its intangibility being its downfall. It is only the illusion of the art, but without that manifestation of the corporeal it becomes an outward projection of soul, not the real thing.

It is disappointing – because it comes so close to achieving its dream. Title track ‘Skin and Bones’ becomes its Pinocchio moment, but even that – in part – flounders.