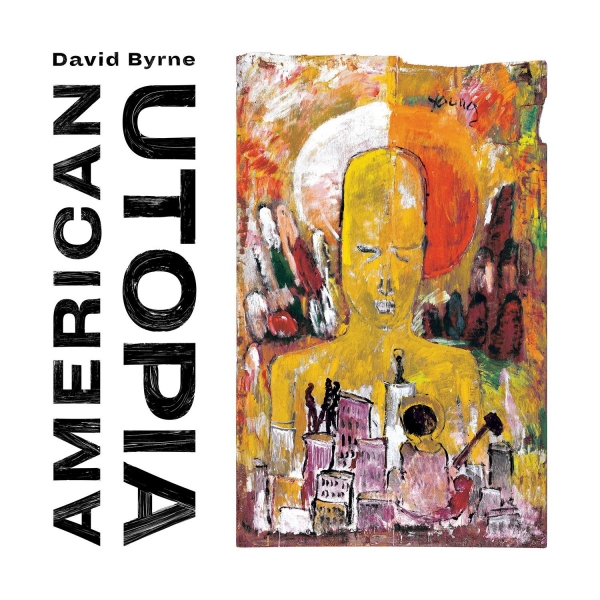 Despite being an artist who really should need no introduction, David Byrne spends the majority of new album American Utopia introducing listeners to David Byrne 2.0: iconoclastic crooner of the impending apocalypse.

Much has been made of the lead single’s similarity to LCD Soundsystem – which should strike the listener as being something of an oxymoron. LCD Soundsystem wear their Talking Heads influence loudly and proudly, and the majority of their excellent 2017 album American Dream (go figure) features the distinctive polyrhythmic heft of Talking Heads’ magnum opus Remain in Light (see: “Other Voices”, “Change Yr Mind”).

The lead single, “Everybody’s Coming to My House”, does evoke James Murphy’s dance-punk crew in its bass-heavy groove, dense polyrhythms and over-caffeinated, hyper vocal delivery. Hey, it even sounds like an LCD Soundsystem title. But that’s where the similarities end – the paranoiac sentiment and unhinged humour is classic David Byrne: “We’re only tourists in this life / Only tourists but the view is nice.” This cynicism and biting sarcasm continues throughout the record.

Across the other nine tracks, there’s very little to indicate that the man you’re listening to used to be in Talking Heads, nevermind the resident creative genius. But the feeling of the album is consistently dark, cynical and biting, which continues – in some way – the claustrophobic, agoraphobic themes of Fear of Music and Remain in Light.

The album opens with “Dance Like This”, which clashes soothing, spare piano with clattering, thunderous industrial sounds – it often feels like two separate songs woven together. The skittering percussion sounds and weary preacher delivery of “Gasoline and Dirty Sheets” finds Byrne moaning and crooning over a delicious, softly funky beat. The sonic patchwork of the track includes some harmonica, a sampled drum fill and some chunky bass.

Some measure of Talking Heads flavour returns in the chorus of “Every Day is a Miracle” – its singalong, almost choral quality is instantly reminiscent of the Speaking in Tongues/Little Creatures era. The relaxed, buttoned-down mood of the track is, unsurprisingly, sharply contrasted with the lyrics: “Every day is a miracle / Every day is an unpaid bill.”

The gossamer-delicate “Dog’s Mind” and glitchy, clattering sounds of “This is That” follow, and expand the sonic palette of the record even further. The apocalyptic, doomy quality of both tracks serves to increase the tension further: it’s apparent that the Utopia of the title is, in Byrne’s mind at least, toxic and increasingly worrying – the press kit makes mention of the sincerity and purity of the American Dream, but also comprehensively states Byrne’s opinion on the state of it: “Can we start over? Is there another way?”

The tropical, head-nodding kitsch of “It’s Not Dark Up Here” is an album highlight: it’s punctuated by oddball “HEY”s and shuffling percussion. It’s got a relentless, pulsating rhythm and features some gorgeous, sincere singing.

An album this strong, delivered this late into an artist’s career, would usually be given an ugly tag like “return to form” or something equally crass. However, in Byrne’s case, it’s simply a continuation of what has been – and will hopefully continue to be – a glittering career full of highlights and continuations of form. As recently as his last record – Love This Giant with St. Vincent – he produced a glorious, real masterpiece. So, strangely, this is just business as usual for a man who, at this stage, would find it impossible to make anything less than amazing. Long may he continue.