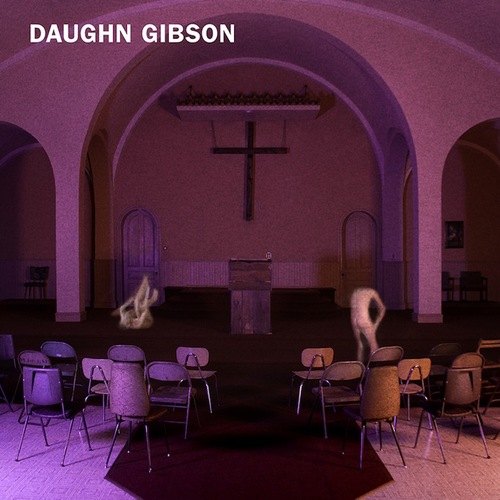 When Pennsylvania resident and former truck driver Daughn Gibson stepped into the spotlight with last year’s debut All Hell, he presented a puzzling, pleasing set of contradictions. His songs made their home in the dank barrooms of blue-collar country music, but introduce 21st century looping and vocal sampling to the mix. Their melodies still have a lightness of touch that’s instantly accessible, but they hide dense layers of criss-crossing elements and sonic left-turns, demanding closer attention with each listen. And as the erstwhile drummer of crusty stoner rock outfit Pearls & Brass, Gibson brings a diverse sense of rhythm to a genre that leans towards nondescript, metronomic tempos.

The biggest contradiction of all is Gibson’s voice, a rich baritone that cuts a strange middle ground between Lee Hazelwood and some overcompensating Elvis impersonator. By turns authentic and affected, his vocals juke from haunted hometown to Vegas gloss with a knowing sense of performance. It’s a voice that lets Gibson spit steel out of one side of his mouth and syrup out of the other – more ammunition to explore his songs’ motley cast of lovers and fuck-ups. While bassy country drawlers might provide the closest physical match to Gibson’s vocal pitch, his delivery bears more resemblance to Tom Waits’s skewed melodrama.

All Hell was the entrancing centre point at the heart of all those contradictions, with Gibson using that tension to craft a set of songs that were at once sad and funny, familiar and refreshing. So his second album Me Moan, arriving just over a year after its predecessor, comes with a sizable pair of boots to fill. Certainly, his core elements come present and correct for album number two: country and soul vibes undercut with shifting samples; catchy melodies lent weight by intricate instrumentation; and that voice, which still swallows songs whole and spits them out forever changed.

But Gibson’s label-jump from White Denim to Sub Pop since his debut has apparently heralded a widening of his canvass. That much is clear from album opener ‘The Sound of Law’, which follows up a knotty guitar intro with machine-gun snares, flights of strings and a chorus that sings its escapism with an unexpectedly earnest force. For the most part, Gibson’s distinctive style bears the weight of this new spectacle well; at the very least, it makes for some thrilling fireworks displays. ‘Phantom Rider’ positions itself halfway between the barn dance and the rave with its blend of tinkling piano lines, finger-snap beat and Purity Ring-esque synth grooves. Elsewhere, Gibson lays it on thick with the humid swagger of ‘Kissin On The Blacktop’, which expertly marshals a chaotic host of elements and transforms them into a riotously enjoyable slab of muscular swamp-funk.

These raucous highs are well-supported by Gibson’s more atmospheric numbers, with tracks like ‘The Pisgee Nest’ and relationship-crisis tale ‘Franco’ exuding a mystery and atmosphere that DG devotees will instantly recognise. In fact, the tracks flow beautifully as a whole, building up to an emotional peak then receding into the shadows to gather strength for the next.

The album’s cohesiveness and its lush sonic range are clearly among the benefits of improved production, and Gibson has made good use of his new toys. Nevertheless, it’s impossible to ignore the fact that few of the album’s highlights quite match up to the strange magic captured by All Hell’s finest moments. The sheer density of his beefed-up sound often obscures his lyrics, somewhat dulling the sharp edge of his storytelling. The impressive musical depth on offer goes a long way towards making up for the loss, but at times it threatens to undermine the fragile chemistry that makes these songs so unusual. After all, a voice as special as Gibson’s deserves the centre stage.