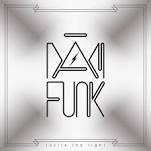 For an artist that trades under the name Dam Funk, it shouldn’t be surprising that this music tends to the funky end of the musical spectrum.

Like fellow Los Angeles resident Thundercat, Dam Funk’s Damon Garrett Riddick is a proselytiser for a sound that has its root in the past, but its electronic underpinnings and creativeness guarantees that that this is album is not overfed on nostalgia.

"We Continue" with its squelched bassline poses similarities to his 2012 standout single "Hood Pass Intact'"in its vocal melodies and sets the record out on a familiar path. It soon becomes apparent that the second album from Dam Funk is also one that has much in common with his debut Toeachizown - one where drum machine-steadied rhythms often provide reliable backdrops for swathe vocals and funk edged basslines that help reignite the spirit of Seventies era P-Funk, alongside a cosmic sonic brew of G-Funk, P-Funk, Boogie and Funktronica that has been re-imagined for a 21st century audience. But though part of its spirit is rooted in the past there is enough on offer to prove that this isn’t a homage to the past.

With an extensive list of collaborations including the 7 Days of Funk album with Snoop Dogg behind him, it would be highly surprising if there wasn’t an extensive cast list on Invite The Light. The aforementioned joins for the laid back vibes of "Just Ease Your Mind From All Negativity" but other guests include Q-Tip, Nite Jewel and Ariel Pink. Regular cohort Computer Jay also guests alongside Red Hot Chilli Peppers bassist Flea on the atmospherically pleasing "Floating On Air".