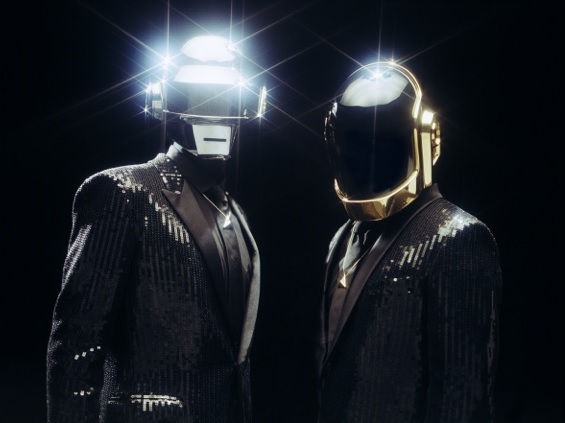 Apparently it’s impossible to talk about Daft Punk without hyperbole. You can set aside all the praise coming from critics, as much as that confirms my point.

Just look at “The Collaborators” video series about the making of the pair’s new record, Random Access Memories, and you’ll find the artists themselves tripping over each other to make the most exaggerated assertions. Todd Edwards claims that he moved from New Jersey to L.A. because of the recording sessions. Chilly Gonzales states that he doesn’t usually like to collaborate, but made an exception for “people who are in possession of some true key to the zeitgeist.” DJ Falcon simply stated that, “For me, they never disappoint.”

But perhaps the most hyperbolic statement about this album is also the simplest: that every hyperbolic statement may all be true. Daft Punk have not only made a career-defining album, but the smartest dance album since disco. Which makes sense, not only because Memories is a disco record, but also because disco was the precursor to EDM. Aside from the vocoder’ed vocals, you’d be hard-pressed (at least, on the surface) to believe this album came from the same guys who created the ecstasy-filled ‘One More Time.’

But then again, this is Daft Punk we’re talking about – the group that never does the same thing twice and rarely follows trends. Naturally, if EDM is what’s de rigueur, then Daft Punk can’t make an EDM record. Even if they’re the reason that, say, Skrillex has a career. No, not for Daft Punk. Electronic dance music is who they were. Throwing out the samples (apart from album-closer ‘Contact’), recording on analog and bringing in Nile Rodgers to play guitar, Nathan East to play bass and J.R. Robinson to play drums – the duo go backwards in order to move forwards, and make a statement.

Two androids made dance music with emotion, basically. But they’re still robots, meaning that this music is as meticulous, as precise and fed through as much calculus as anything the Daft Punk have released. Now, this may seem odd if you consider the French duo’s comments about how dehumanized the process of making music has become. Such modern studio perfectionists as Guy-Manuel de Homem-Christo and Thomas Bangalter are forced to use computers in order to find the perfect sounds, and the duo has admitted as much. That said, computers aren’t the basis for composition. They aren’t an instrument, they are a tool.

Just one tool used in the making – “crafting” might be a better term – of this album. ‘Giorgio by Moroder,’ for example, is a nine-minute, multi-part suite that opens with a spoken-word intro by the titular Italian legend and closes with a paranoid guitar solo before fizzling into a bath of feed-back. In between you’ll find: a synthesizer making concentric circles around a sparse rhythm section, two different breakdowns (a short, jazzy outing and a percussion freak-out), orchestration and a second spoken word part. Is it over the top? Yes. Self-indulgent? Or course. Insists upon its self-importance? Absolutely. Features entire portions that are unnecessary? No question. And that’s the point, and why it works. In effect, Daft Punk have made a dance record that comments on the imperfect nature of humanity. In the case of ‘Giorgio,’ the observation is that sometimes life is frivolous, but that doesn’t mean it can’t be fun or surprising.

So, in other words, Random Access Memories is as much a progressive rock record as it is a disco record. Well, Daft Punk’s version of disco, anyway. Attentive listeners will discover that beneath this disco-based album lie shades of trap music drizzled over ‘Doin’ It Right,’ jazz fusion injected into ‘Motherboard’ and ‘Contact,’ and even AOR rolled into ‘Fragments of Time.’ None of it shouldn’t work. Combining progressive music with disco is by itself a tough order, and that’s especially true if you add any of the above ingredients. But Daft Punk make something work that shouldn’t because they’ve always been about the road less traveled.

This explains why on Memories, they had someone other than themselves sing into a vocoder. The Strokes’ Julian Casablancas appears on the synth-pop gem ‘Instant Crush’ with his voice filtered through their signature style, something that initially feels profane. No one sings into a vocoder! It’s practically been their trademark for two decades! But it works with Casablancas because the song’s about being frustrated by a relationship. “Now I thought about what I wanna say/ But I never really know where to go,” he sings over a tumbling melody. “So I chained myself to a friend/ ‘Cause I know it unlocks like a door.” Casablancas simply sounds reluctant to accept how perplexing life can be, especially regarding relationships. The vocoder, then, acts as a way to fully demonstrate how bemused he is. That he’s is the only guest whose vocals get this treatment suggests a mistake, one that precariously sticks out. It’s the kind of song you’d record assuming it’ll be a b-side. But to these robots, it makes perfect sense do something seemingly blasphemous and put it on an album. They wouldn’t be who they are otherwise.

It’s the same reason they had Paul Williams sing on ‘Touch,’ the assumed centerpiece of the record. A full-blown space rock ballad featuring a samba detour in the middle, it’s a track that, upon hearing, caused a fellow critic to remark Williams was a bad choice, as he lacks “the gravitas to pull it off.” That may be true, but may have also been the goal. Here, Daft Punk are going for groove, for living in the moment, and for blemishes. So, yeah, they could’ve used a superstar like David Bowie, but it wouldn’t fit. The robotic duo went slightly under the radar in service to a song that, lyrically, is simultaneously the most and least human thing Daft Punk have ever been a part of. “Sweet touch/ You’ve almost convinced me I’m real/ I need something more,” Williams sings over the somber piano coda. It’s beautiful and sad.

There’s that dichotomy, again: Robots making songs about feeling. Even when they make the perfect summer song, it’s got a pessimistic underbelly. ‘Get Lucky,’ featuring Pharrell Williams, is the breeziest thing Daft Punk have ever made. The itchy slink of Nile Rodgers’ guitar suggests a wonderful sunset that never ends. Yet, Williams sings of two people that aren’t exactly in sync with each other: “She’s up all night t’ill the sun/ I’m up all night to get some/ She’s up all night for good fun/ I’m up all night to get lucky.” Pharrell was quick to point out the meaning of the song goes beyond sex, but even if it isn’t, the boy and girl are clearly on different wavelengths. To the guy, the sparks aren’t there and result is disappointment. But he isn’t leaving: “ We’ve come too far/ To give up who we are.”

Album closer ‘Contact’ opens with audio from the Apollo 17 mission over the cautiously optimistic synth from The Sherb’s ‘We Right Tonight.’ The immediacy of the song is then thrust forward when the song begins its sprint as more and more synths are piled on each other. Omar Hakim’s drums stumble over themselves as they dash alongside. Suddenly, everything bleeds together into a sonic haze and begins an ascent straight for the sun. Pulses quicken. Then…it fizzles out in an anti-climax and the album is over.

Which is just another way for Daft Punk to comment on being letdown. This album is a perfectly imperfect vision of humanity as seen by two androids. It’s not cynical or calculating like a robot might view it but it isn’t cheery, either. Even when they sing optimistically about music and life, there’s a hint of inhuman over-simplicity: “Let the music of your life/ Give life back to music.”

Yet, as Todd Edwards observed, it’s somehow a robot duo that is ironically “bringing soul back to music.” Edwards sings lead on ‘Fragments of Time,’ the record’s most human song. Juxtaposed to a busy AOR arrangement, he speaks of being content even if that means siphoning off happiness from memories – be they real or digital. It’s this seemingly stark contrast that colours all of Daft Punk’s work. Despite the level of fastidiousness that’s standard to Daft Punk, Random Access Memories still sounds loose. The album doesn’t feel synthetic or disingenuous, as it perhaps should. So perhaps these two are cooler than anyone you know. Perhaps they are the cultural apotheosis everyone’s in awe of. Then again, to create music of this calibre, perhaps they really are two robots from another planet.