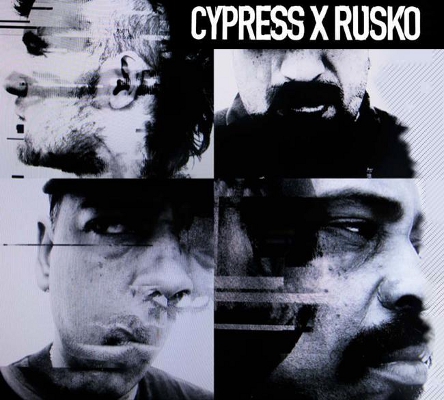 Cypress Hill discovered “dubstep” around a year and a half ago. Apparently, the nasally pitched MC B-Real would often ask fans to contribute to his live mixes (on his web channel breal.tv) by sending him track suggestions of current music. Some people started to send in tracks that incorporated elements of dance music, in which notably would often include the brash electro throb of some US-made dubstep. This small dose of crowdsourced talent spotting allowed him to keep abreast of anything new that was coming into the area, and also first introduced him to British producer Rusko. In awe of the production techniques that were very different to those he was accustomed to with making hip-hop, B-Real said: “It would take me forever to figure out how to do any of that kind of shit.”

Since Rusko moved to LA in 2009, audiences at his shows have gradually swelled in numbers. Alongside other artists such as Flux Pavillion, they have sold a sound that infuses heavy euphoric bursts with lashings of pop and “rave” touches. Backed by the official and unofficial remixes of tracks by M.I.A, Britney Spears and Lady Gaga, Rusko is cleverly working his way onto more commercial airwaves. Despite being known for his more aggressive tracks (‘Woo Boost’, ‘Mr Chips’) – something that Cypress Hill are fond of – Rusko’s recent attempt at distancing himself from the macho wobble crowd occurred in the form of his last album Songs, and in recent interviews explained that the album was a direct reaction to the aggressive “brostep” coming from other acts such as Skrillex. “Why dance to angry music?”, he asked.

Reinvention and risk taking has predominantly been the way for Cypress Hill over the last decade. As recounted in the 2001 track ‘Kronologik’, it seemed that whatever they did, fans at first just didn’t “get it”: “’98 was kinda great, cos it felt just like before/ =We hit the studio, recorded Cypress Hill IV/But someone dropped the ball, as I still recall/Cos it felt Cypress Hill got no support at all.” 2004′s To Death Do Us Part managed to include influences such as reggae and dancehall, whereas 2010′s Rise Up heavily relied on super clean production and bountiful guests and guitars; now this EP sees another change in direction, embracing a different platform for fellow MC Sen Dog and B-Real to express themselves over.

One of the potential traps surrounding this release was always going to be whether both camps could form a good enough understanding of each other in a short space of time, and then being able to create compositions that didn’t sound just like a copy and paste mashup. Unfortunately, the guest re-appearance of Damien Marley on ‘Can’t Keep Me Down’ aside, the tracks on this EP sound too similar and already formulaic (and even Marley had already previously appeared with the band: on the track ‘Ganja Bus’ from Till Death Do Us Part). Both ‘Lez Go’ and ‘Roll it, Light it’ feature the use of arpeggiated tweaked synth sounds which flutter around the growling wobble bass. The staged “drop” in composition on ‘Can’t Keep Me Down’ also gives a slight break in the EP, but with similar production to the more dub influenced tracks on Songs, it feels just too hurried. It’s a shame that Cypress X Rusko‘s entire lyrical content concerns smoking weed (though I really expected nothing less): they rarely talk about anything else and barely dip their toes into areas of social concern or political protest. Previous Cypress Hill albums have been criticised for being slightly erratic with their inclusion of different musical styles; on the basis of this EP their planned future album seems likely to feature too much repetition and will probably be accused of not being experimental enough.