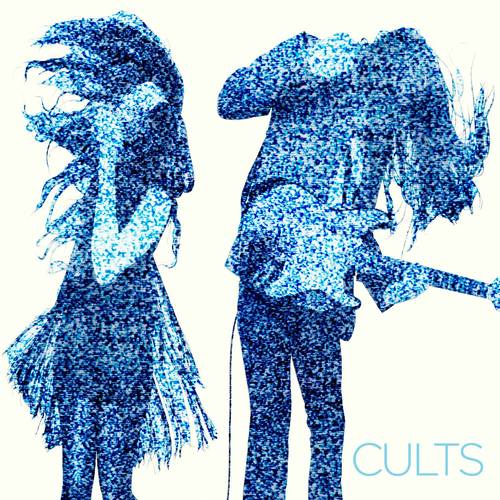 Cults went from “where did they come from?” blog darlings in 2010 to major label artists in 2011. The end product of that incredible year was the band’s self-titled debut, a giddy mix of 60’s pop, girl group charm played with a modern edge that was addicting, unique and accessible.

The band, songwriter/multi-instrumentalist Brian Oblivion and singer/lyricists Madeline Follin, was also a couple and during Cults’ run of professional success Oblivion and Follin’s relationship was falling apart. At the end of the tour supporting the album, the couple broke up but the band didn’t. After a few months of soul-searching and experimenting with bath salts in Japan (maybe that’s the same thing), Oblivion and Follin reunited as Cults to record their follow-up, Static. The specter of the failed relationship gives the album a distinctly sombre tone, but for all the inner turmoil, Static is remarkably of a piece with their debut.

The album gets off to a promising start. On brief opener ‘I Know’, Follin’s vocals soar gorgeously overtop the surfy twang of Oblivion’s guitar and the song’s elements come together in gorgeous slow motion. For all of its retro leanings, part of what keeps the bands from ever feeling kitschy is a certain aggressiveness in Follin’s singing (for example, the way she attacked the chorus on Cults’ ‘You Know What I Mean’) and the Sleigh Bells-eque, so-glossy-it’s-hard production. The driving ‘I Can Hardly Make You Mine’ with its warm, fat, 60’s-ish bass-line, is a perfect example of this aesthetic. On the verses, Follin sings prettily in her exaggeratedly girlish voice over nothing more than drum, bass and xylophone. It works beautifully because Oblivion knows how to use rhythm–almost every song here finds a groove–and space and because Follin can really sing.

‘High Road’, with its ominous, slightly tripped-out organ, atmospheric guitars and skittering drums is a much busier take on the band’s usual style. The effect is a moody and anxious sound and when Follin sings “I should have took the high road/and now it’s such a long way back,” she sounds utterly lost and forlorn. But that high point is followed by ‘Were Before’, which begins by repeating the melody of ‘High Road’ only with Oblivion singing, and so by roughly Static‘s midpoint Cults starts to sound like it’s running out of ideas. While the band doesn’t really hit any wrong notes and is never less than pleasant, the sameness of the material over the album’s back-half manages to make its quick 35 minute runtime feel a lot longer.

Cults seemingly emerged with its aesthetic fully-formed. On Static, the band uses noisier guitars and more complicated arrangements to push at the edges of their sound. The album’s darker tone is an interesting shift but it also comes at the expense of some of Cults’ wilder moments. Ultimately, these are small changes. Cults is a pop band – albeit a very distinctive one – and Static only works when the band delivers on the melodies that made its debut so compelling.