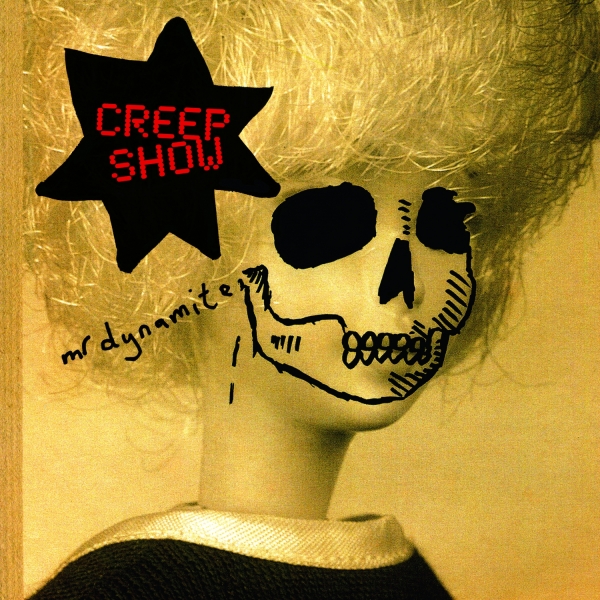 They first met in 2014, but went without a name until their current moniker revealed itself to band member Benge in a dream, in much the same way that debut album Mr. Dynamite bursts forth like Athena from the pounding heads of four Doctors Frankenstein, dripping with boom-tschak beats and post-human pathos.

For an example of what this sounds like, look no further than the title track: an Adam-and-Eve patchwork of pitched samples sewn together by Benge and Phil Winter into a monster who just wants to get down to an eerie theremin jam. The 80’s hip-hop-infused “Modern Parenting” showcases a vaudevillian troupe of narrative fragments, casting a disdainful eye over a showbusiness industry that salivates at the prospect of new ambition and trauma ripe for exploitation. The chorus is a timely warning to the hand that feeds: beware of getting bitten. “Endangered Species” meanders through introspection and dystopic authoritarianism, contrasting harmonious backing singers with jabbing synths and shapeless cries indistinguishable from ecstasy or pain, while Grant cushions the blows of his blunt, disarming verse.

“Tokyo Metro”, “Lime Ricky” and “Fall” provide ample opportunities for Creep Show to go the full Mensch-Maschine, layering looped industrial beats and heavily modulated samples in a series of disorienting Escher-like breaks. Amidst the sci-fi surrealism of the rest of the record, slow-burning closer “Safe and Sound” dreams of interstellar midnight drives but confronts a very terrestrial, flesh-and-blood mortality. “Baby, don’t look so sad / I’ve always been a fighter, you know / And I’ll be alright” sings a contemplative Grant, borne on auroral waves of synthesizers; “I’ve got a road I must travel / And I won’t be looking back / I am a part of something much bigger / And I can’t be thrown off track”.

Mr. Dynamite's expansive instrumental interludes sometimes disrupt the pacing and punch of the record, defying coherence, but this never seems like anything less than deliberate mischief. It’s merely a performance of the group’s own self-discovery, proudly extending and flexing their new cyborg limbs. “You take offence as if you understand what I just said” quips Mallinder in a distorted drawl on the radioactive cabaret of lead single “Pink Squirrel”. Perhaps, against the wicked wit of Creep Show, resistance is futile.