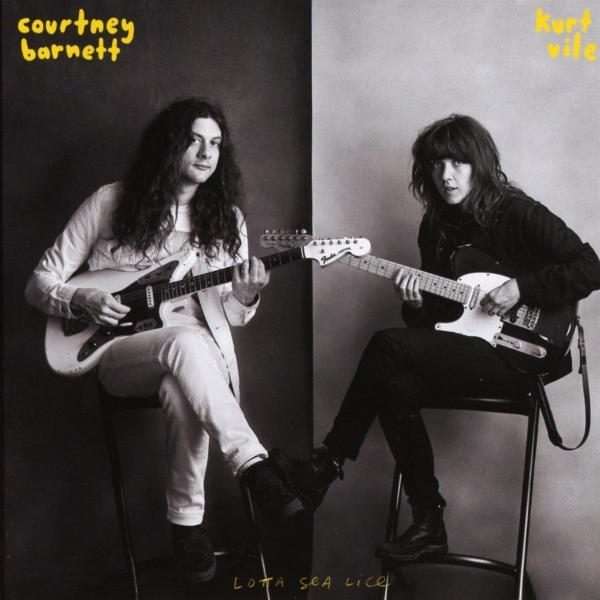 When Courtney Barnett’s voice cuts over Kurt Vile’s a couple of lines into “Over Everything”, it’s hard to believe these two musicians ever made music separately, so ideal is the pairing of their voices on this sugary sweet first track.

In fact, it’s ideal throughout Lotta Sea Lice – each woozy yet warm, the two passing lyrics between each other as though they’ve been songwriting partners for the whole of their respective careers.

Lotta Sea Lice is a collaborative album from Courtney Barnett, the Melbourne-based indie-garage guitarist whose 2013 The Double EP: A Sea of Split Peas and 2015 debut full-length, Sometimes I Sit and Think, and Sometimes I Just Sit have received nothing but critical praise; and Kurt Vile, indie-rock extraordinaire and former War on Drugs lead guitarist who is now six solo albums deep, reaping similar commendations with every release, and oft listed as one of the best songwriters of his generation.

It’s no surprise pairing. The characteristics of each other’s music match-up: electric guitar-led, tight but not overly-intricate melodies strung out over typically witty, provocative lyrics detailing mundanities and trivialities of a normal life made odd by the grueling detail in which they are presented. Oddness is what both artists delight in, and what they lace together here.

For Lotta Sea Lice Barnett and Vile have co-written, written individually for each other, and re-worked older songs, both their own and other people’s. The origins of these songs lie far and wide – just as far as the distance between Barnett’s native Melbourne and Vile’s native Philadelphia, Pennsylvania – but they are married together with charm and the lazy nonchalance that makes each artist so ridiculously, and unusually, endearing in their own right.

Old material is given a new spin, but pleasingly not over-worked. For Barnett fans already familiar with “Outta the Woodwork” – a pick not from her debut full-length record, but from her 2013 double EP – it is hard to imagine the slacker track could become any drowsier, that it could succumb to any more wandering. With Vile taking over vocals and guitar, “Outta the Woodwork” takes up even more lazy space than before, stretching it out thirty seconds longer than the original, to a hazy 6 minutes 20 seconds.

Among the covers sits a rendition of “Fear is Like a Forest”, written by Barnett’s long-term partner and Milk! Records label buddy Jen Cloher, as well as rock and roll classic “Blueberry Hill”, which Barnett and Vile rev up and then bring back down to Earth as if it was their very own. Here both artists sing and play guitar, as Vile also plays keys, and Jim White and Mick Taylor (of The Dirty Three) accompany of guitar and drums.

While this is a project for the duo – each a black or white half sitting as a near-perfect reflection of the other on the album cover – Barnett and Vile have also brought along fellow musicians from their respective scenes to function as the musically tight, but aurally loose backing band heard on record. The free and relaxed feeling of all these musicians together is just what makes the album so charming.

With this band behind them, and among the warming melodies and typically sharp lyrics, Barnett and Vile do not hesitate to drop their heads and pick up their guitars to shred a bit – presumably with their (happily matching) rockers’ hair swinging out below them.

While both musicians are known for being “slackers”, for rolling around with their guitars onstage and always playing it very cool, the truth is that they are both thoughtful, sometimes sentimental musicians, with voices that can sing of love and hurt just as much as eating croissants (“Continental Breakfast”) or friendly girls who insist on touching your face (“Untogether”) – and this is delightful.

“Peepin’ Tom” – which appeared on Vile’s 2011 Smoke Ring for My Halo as “Peeping Tomboy” – is taken on by Barnett alone. Her succulent voice is accompanied by the twang of bluesy guitar. Even without any backing band or the songwriter himself, the delicacy and undoubted sincerity which Barnett brings to such a rousing track is moving, in a pleasingly low-key manner. Understatement is what the record rests on, and it makes for an endearing listen.

“I cherish my intercontinental friendships” sings first Barnett, and then Vile, on “Continental Breakfast”. Let’s hope this long-distance musical friendship continues far, far beyond this one record.