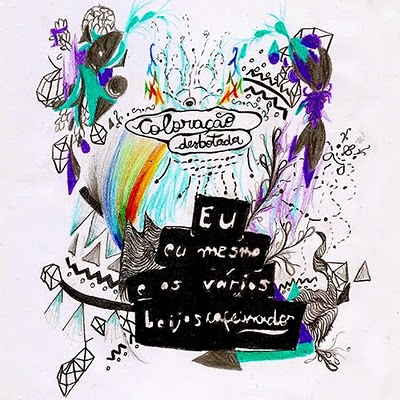 New far-out sounds are emanating from the shores of South America; Coloração Desbotada revel in a new music that re-imagines South America as a land of vibrant colours and limitless possibilities created by filtering the sounds of the second golden age of American global commercial and ideological expansion (the 80s) through the prism of flowering Brazilian economic optimism, separating the colours into a multi-faceted, turbulent lo-fi sound. Five years ago this record was released on a tiny DIY label named Transfusão Noise Records causing the local scene to erupt in a flurry of activity which then spurred Pug Records on to re-release this record on a global scene. It’s interesting that it has become like this, suddenly we’re hearing more American/British inspired music from scenes that traditionally would have never had a look in, except in rare cases, which seems like a strangely skewed advertisement for globalism and expanding markets.

Eu, eu mesmo e os vários beijos cafeinados is a remarkable EP, managing to cut the line between sweet melodies and a crushing production process that seems to squeeze all fanciful elements into a wondrous sludge. It’s on par with some of Times New Vikings attempts, which is all the more exciting as it came out five years ago, especially when it comes to Le Almeida’s vocals whose melodic tones pierce through the wall of sound in much the same way as TNV’s Adam Elliot. Unlike Times New Viking however Coloração Desbotada never quite reach the ear-shattering mastered volume that seems to be now associated with the lo-fi scene, instead the production affords some sense of the natural levels of the instruments, allowing them to breathe, such as in the track ‘Conclusão-Ruido-Medicinal’, where volume control allows for the vocals to contain some real heartfelt emotion.

‘Extenso Ambiente’ sits at the heart of the album and is undoubtedly the albums centrepiece. With a run time of 02:32 it mixes that battered lo-fi sound with an essence of shoegaze. Combined with a uplifting riff that never seems to stop nor reduce in volume throughout the song it captures how well this band write songs. Eu, eu mesmo e os vários beijos cafeinados is not a perfect EP but it captures very well a time and a place with a focused energy that runs throughout. Furthermore the re-release features a bunch of new bonus tracks that build upon the old tracks found in the earlier release. All are as you might expect; fuzzy, drawling, blurred, yet amazingly effective.