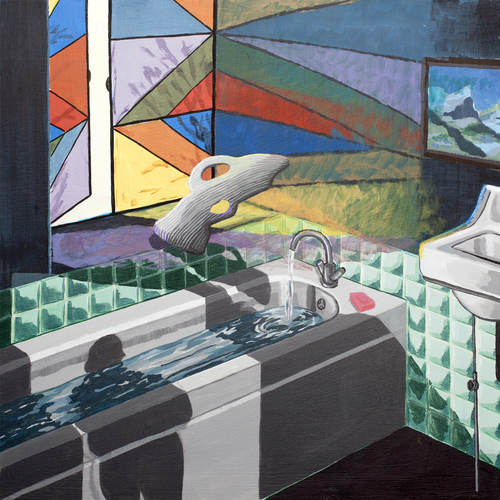 Adding an additional member is a common move when bands want to change things up, but fans will be pleased to hear that recuiting a new a guitarist hasn’t resulted in a massive shift in sound on Cold Pumas’ second album The Hanging Valley.

Four years after the release of their debut Persistent Malaise, the 'Pumas still straddle a tightrope between post-punk creativity and reliable, Motorik-led grooves. There’s been no grand evolution in sound, but instead a fine tuning of their lo-fi hugging bursts of controlled noise. The reliably wound and hypnotically circular riffs of opener “Slippery Slopes” vibrantly signal what is to follow across The Hanging Valleys nine songs.

The quartet have created an album that firmly embraces the Mark E. Smith-endorsed mantra of the three R’s of repetition, repetition and repetition, but its cyclical nature strengthens rather than detracts from their resolve. Cold Pumas excel at being able to detect a taut groove and seamlessly let themselves relax into it.

Their love of tight riffs and a willingness to embrace the abrasive hints at shared natural inclinations with one-time hometown compatriots Traams. "A Change of Course", with its melodic use of controlled feedback and inter-weaving guitar lines, also points to an adolescence wisely spent adoring Sonic Youth. Elsewhere, "A Human Pattern" sounds as if it were created with the leftover remnants of a long lost, dynamically condensed Les Savy Fav number.

The Hanging Valley isn’t a departure away from Cold Pumas past, but instead another further and deeper imprint into a musical territory. Ultimately, it may not dramatically change their fortunes, but it remaina an album that’ll help further cement Cold Pumas as being one of the UK’s most underrated bands. If they were American, they’d be as a fawned over as Parquet Courts.