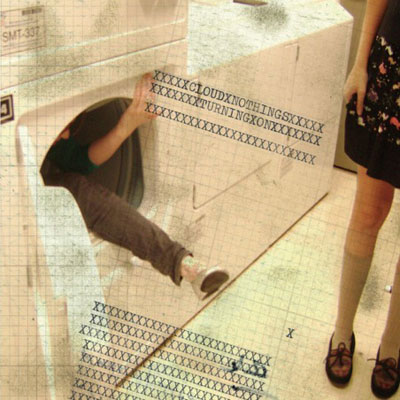 With Turning On seeping through the holes in your speakers, one quite distinct picture is formed in your head: One of Cloud Nothings wiping the sweat off their foreheads, milling about a tighty-packed, windowless studio, passing a bottle of whiskey in exchange for a good riff. But then, you read the bio and to your amazement, you discover that Cloud Nothings aren’t friends from school or homeless brothers. Instead, we have one guy posing as several: Dylan Baldi, at least until Turning On, had little company and little feedback. He found several instruments – ones usually delegated to a few band members – and kept them all for himself.

Now, Baldi has changed his outlook and future Cloud Nothings work will include contributions from other band members. This, as a whole, makes Turning On a more enticing collection of songs. Or at least, it will once the band takes off and starts selling thousands of records.

You can sense, underneath the flaws and the raggedness of ‘Hey Cool Kid’ is a fired up, instantly likeable punk song. The production attempts to snatch this thought from your head; filtering poignant melodies through a foggy centre, but it has proved to be Baldi’s biggest hit to date, particularly on the live circuit. Equally, ‘Strummin’, a sedated backwash of grinding chords and woozy vocals, is the album’s most complete sounding song. And again, it’d benefit from more exposed production, giving it a grander, sky-is-the-limit voice.

Again, Turning On, more than anything, will be used as a reference point for when Baldi and co. eventually take off. Take off they will, according to most. Many have post-it notes placed on Baldi’s forehead with the words “one for the future” written in permanent marker. And aside from the ‘Leaving You Forever‘ EP, this is the base at which Cloud Nothing’s career begins.

A gradual streamlining, bleaching out of the lo-fi production, however much displeasing it would be to current loyal fans of the band, seems a suitable route to go on. You can imagine the ferocity of ‘Morgan’ or the smartly-attired ‘Old Street’ being given more of a voice and opening a few more eyes. And with a debut album poised for release, the prospect of Turning On’s assets being given more energy and urgency is almost too much to handle.