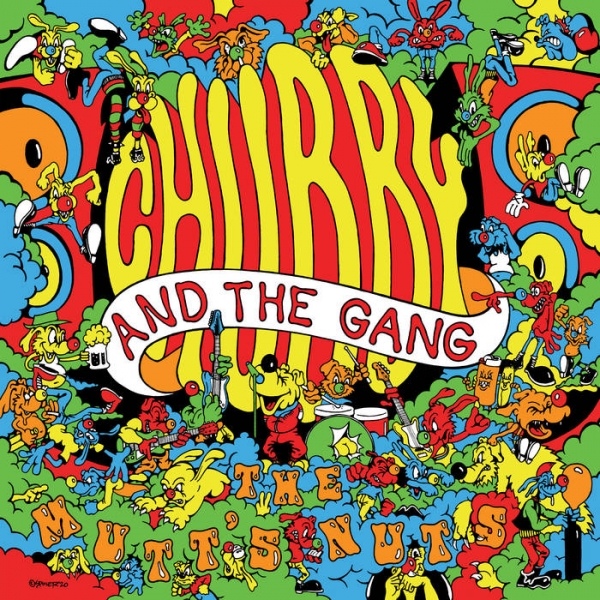 Chubby and the Gang burst out of the gate early last year with their debut album, Speed Kills; built out of blistering hardcore, stumbling pub rock and oi, hints of power pop, and a solid dose of London proletarian fury.

Despite the pandemic, which quickly hamstrung any chance of supporting the record live, the band had quickly managed to break out of the typically niche box that hardcore all too often occupies. Fortunately, they’re set to capitalize on that momentum now with The Mutts’ Nuts, which sees the band getting even tougher, more direct, and surprisingly, more vulnerable.

The record opens with characteristically blustering style, as Chubby roars “Guess who’s back, back again/The gang’s storming through, go and tell your friends.” The band then proceeds to tear through the next six songs of direct, unfiltered hardcore. Here, Chubby and the Gang are in their element, as seethingly angry, irreverent, and fun as ever. The band has come out of lockdown unruly and raging, whether they are railing at landlords and economic injustice on “It’s Me Who Will Pay” or painting the day-to-day life of a cab driver on “On The Meter.”

But, even in the record’s moments of palpable anger, there is a true honesty to the band’s writing. There’s no posturing here. Charlie works full-time as an electrician, while most of the band also work trade or artisan jobs. As a result, songs like “Coming Up Tough” hit all the more deeply. The ripping punk track tells a surprisingly heartfelt story, inspired by Charlie’s relative who went to prison at a young age and served a 20-year sentence. In turn, these make the moments of working class realism and solidarity equally poignant, as with the crushing march of “White Rags”. “The world is burning, Minneapolis too / Set alight by the boys in blue,” Charlie sings, before later spitting out the chorus: “Say their names / Say their names / Say their names.”

Yet, a change comes on with the surprisingly vulnerable, homesick ballad “Take Me Home to London”, followed by jangling saloon piano on “Born on the Bayou. Hearing frontman Chubby Charles' sandpaper roar, vulnerable certainly isn’t the first word to come to mind. But, much like Partisan labelmates IDLES, the band sees no contradiction between the typically blunt energy of punk and open honesty. As Charlie himself puts it, “Anyone can posture, but it takes a bit of bollocks to actually sit there and try to tell someone how you really feel.”

These moments where the band pulls back are the emotional heart of the record, like the keening, ‘60s doo wop of “I Hate the Radio” or the Billy Bragg-esque balladry of “Life’s Lemons”. Meanwhile, “Lightning Don’t Strike Twice” marries the band’s two sides, opening with gentle country twang and bluesy swagger, before quickly veering back into the gang’s world of “piss-stained alleys and rotten concrete.”

Everything fans loved about Speed Kills, Chubby and the Gang serve up once again on The Mutt’s Nuts. The breakneck pace, plainspoken blue collar bite, and storming anthems are all here, just now tempered with even more heart and vulnerability running through the chaotic mix. Chubby and the Gang are what punk should be in 2021; heavy, fun, and unrepentantly honest.