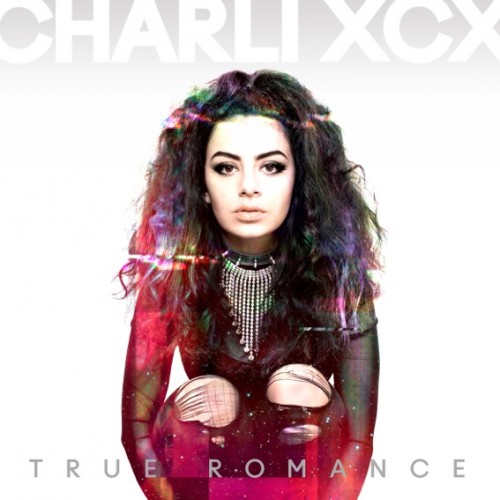 When I met Charli XCX, my mouth coated in bitter Xanax beneath Michael Jordan’s banners and Coldplay’s thumb in the guts of the United Center, she was candid about her goals.

“I want to be a fucking pop star”, she said from the plain black couch in her understated dressing room, sans makeup, hair piled in an onyx tangle devouring a large pair of sunglasses like an ink stained cuttlefish, swimming in a bordeaux crew neck and bouncing a pair of ludicrously high platform sneakers in a caramel-and-cream zebra pattern from thin cigarette legs clung to by jet black cycling shorts. “But I want to do it on my own terms.”

So far, XCX’s terms include being the leading figure of a pop movement, goth pop, that she has subsequently altered over the course of two mixtapes (the miasmic, dreamy Heartbreaks and Earthquakes and the strange, uneven Super Ultra, which is dark in a visceral way her earlier goth pop was not while maintaining a fragile beauty; imagine spider webbed broken glass dusted with glitter) and appearing on Icona Pop’s near inescapable ‘I Love It‘.

An able singer (proof of which can be found in her stripped-down Dalston Heights recordings), XCX’s terms also include a more generous infusing of her love for hip-hop into her newer works, sometimes using an Uffie-like conversational flow that straddles a fine line between bratty and coquettish, and these fresh voices and directions and textures over the past few years have now, inevitably, led to this, her official debut.

True Romance is less an album than a highly cultivated showcase, featuring new compositions and XCX’s early attention grabbers – ‘Nuclear Seasons’, ‘Stay Away’ – alongside excisions from both Heartbreaks and Super Ultra, in what could be considered as a sampler, or perhaps a (very premature) career retrospective. The album is effectively a gallery of XCX’s work so far – the introductory, defining goth pop tracks, the expanding artistry beyond what Charli herself defined goth pop as, the balance she seems to be currently attempting to strike between the two; all are laid on display, denoting her roughly two year evolution in easy to trace lines.

While not the newest of what could be termed her traditionally goth pop songs, ‘You’re The One’ is the most basic example. As goth pop combines pop song craft and approachability with a drenching layer of dark luxuriousness, so too does ‘You’re The One’ shift from clipped vocals and pallbearer shuffling verses to a lofting, romantic hook; the entire thing is a microcosm of the microgenre, vivisected and labelled and easily consumable. Also of this school would be ‘Stay Away’ and ‘Nuclear Seasons’, with ‘Set Me Free’ and ‘Black Roses’ evidence that this template has not been entirely deserted. (Indeed, ‘Set Me Free’ could easily be considered a more melancholic ‘You’re The One’, while the connection between XCX’s earlier works and the thoroughly enjoyable ‘Black Roses’ more esoteric, but still readily identifiable.)