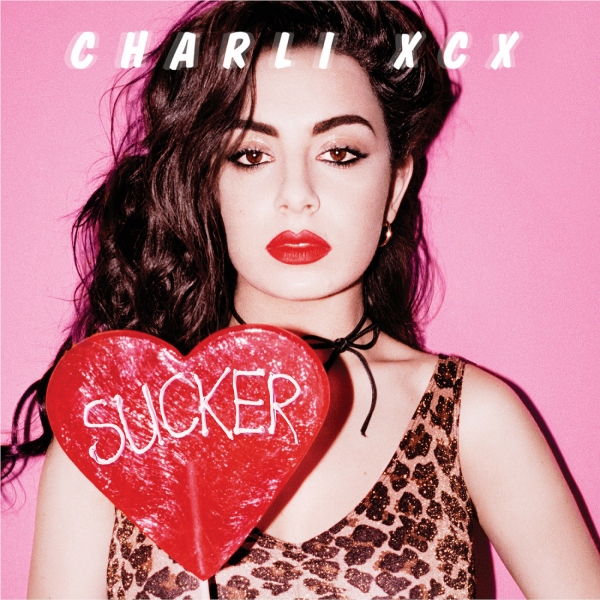 [Suddenly, Occasional Best Fit Contributor Robby Ritacco pulls back his mask to reveal…an American!!] Overly dramatized “reveals” aside, this is an important bit of context for two reasons: First, Sucker came out in the U.S. back in December (sans two tracks and an alternate, Rita Ora-featuring version of “Doing It”), so it’s had an extended gestation period on my side of the pond while its homeland release was repeatedly delayed. Second, Sucker dwells quite a bit on Charli XCX’s transition from the cultish, critically acclaimed pop semi-stardom surrounding 2013’s True Romance to the international feature-megalith status of Iggy Azalea’s “Fancy” - plus, of course, XCX’s own Billboard Top 10 debut via her pop-perfect hit “Boom Clap.”

Sucker boisterously announces itself with the profanity-laden intro of its title track, with Charli quipping as snidely as ever: "You said you wanna bang? / Well / Fuck you / Sucker." That audacious introduction is then edified by the simplistic mantra of the album's second track (and second single), the insatiably infectious "Break the Rules," which sees Charli adopting an over-the-top, celebrity counterculture persona, opting to get high and get wrecked with a Lohan-ian spirit of rebellious ambition. But where Sucker truly springs to life is in track three's poppy, Americana-smashing "London Queen," a track on which the now-LA-based XCX simultaneously critiques and celebrates American pop culture, and even somehow manages to pull off the most innocuous JFK assassination reference possible.

With one hand, Charli brutally dissects the stereotype of the American pop culture starlet ("Break the Rules"; "Famous"), while she uses the other to lovingly embrace her budding opportunity to parlay with the glam life ("Gold Coins"; "Die Tonight"; "Hanging Around"). Yet some tracks really toe the line between the two ("London Queen"; "Die Tonight"). One line from "London Queen" sums it up quite well: "Now I live in Hollywood / I can't stop, even though I know I should / It feels so good," highlighted by the song's background vocals, which pepper the track from start to finish with outrageous, cynical "Oi!"s.

But enough about crossing ponds—after all, it's not the sole backbone of Sucker. As with any pop album, love and lament work their inevitable platitudes into the mix. But Charli's stance on love - be it gainfully requited, inevitably doomed, or snarkily rejected by Ms. XCX - has shifted greatly since the melancholy and cynicism of 2013's True Romance.

The closest sonic link between the two albums is back-half track "Body of My Own" for its expressive-yet-terse nature, but even that's quite a stretch. And then there's "Need Ur Love" - the closer of the U.S. edition and penultimate track of the European release - a song that bears seemingly no traceable line of origin from XCX's past or present save for the masterful producing hands of Vampire Weekend's Rostam Batmangij (whose production was also a major factor in many of True Romance's virtues). Its jazzy piano lines, rockabilly guitar riffs, enthusiastic choral background and glistening Charli falsetto are a testament to the superpowers of production.

At its core, Charli XCX's 2013 album was critical dynamite: a pop record stained with industrial roots and deep, gloomy undertones. Between True Romance and Sky Ferreira's Night Time, My Time, it seemed like a bubblegum-pop counterculture coup d'état was in the works. However, Charli XCX has never been any less than forthright about her pop-star ambitions -  and though taking the scenic True Romance route seems quite the 'road less traveled,' Sucker is a perfect transition into the conventional zeitgeist. It's cynical, it's coy, it's assertive, but it's catchy as they come, with no pandering, no putting on airs and no shortage of substance.