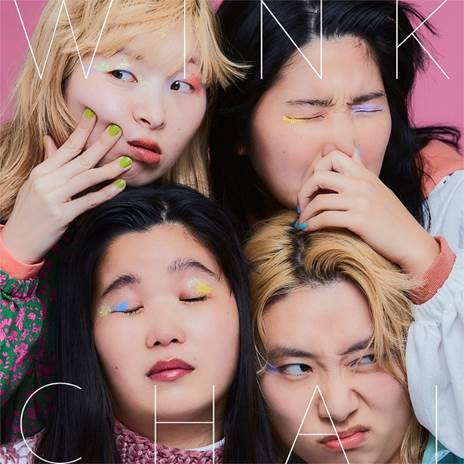 CHAI burst onto the scene in 2017 with all the subtlety of one of those hustling and bustling, in-your-face, neon-lit streets in Tokyo.

Their music was a lively mix of pop, dance, and disco-punk. A kinetic mesh of punchy beats, fuzzy funk, and sparkling hooks, with chirpy, anime character-like vocals spreading messages of female empowerment, self-love and self-confidence. The Japanese four-piece have adopted a self-dubbed mentality of NEO-kawaii, in protest against the suffocating idea of kawaii – or “cute” – that women in their culture feel constant pressure to conform to. Positivity and joy sits at the heart of what they do, and with their 2019 album PUNK that took the form of an exuberant and dynamic sound, full of a hyperactive, uncontainable kind of energy.

That’s still present on WINK. “PING PONG!” is a glitchy 8-bit dance number featuring Japanese chiptune group YMCK, and “ACTION” is an uplifting, body-moving shuffle, inspired by last year’s Black Lives Matter protests. But it’s opener “Donuts Mind If I Do” – a breezy, loungey number – that sets the tone for what’s to come on WINK. There’s an intriguing change in pace and style to CHAI’s usually go-go-go sound this time around, the group’s positivity wrapped up in dreamier, R&B-tinged grooves. “KARAAGE” is a breathy slow jam, comparing love to the caring process of making Japanese fried chicken, and “Maybe Chocolate Chips” is a laid-back serenade likening YUUKI’s moles to the titular sweet treats, while “IN PINK” is a down-tempo electro-funk ode to the colour of love.

Read interviews with CHAI and you’ll see they continually insist that no singular sound or genre defines the group; their genre, their type of music, is whatever they’re currently into, whatever makes them feel good. Like the rest of the world, CHAI spent the past year in lockdown, which not only forced them to live life at a slower pace – for once – but to also seek out comfort during a turbulent and uncertain time. WINK is a direct result of that, an album full of calming energy, with vibes to soothe the soul and the mind, and put a smile on your face.