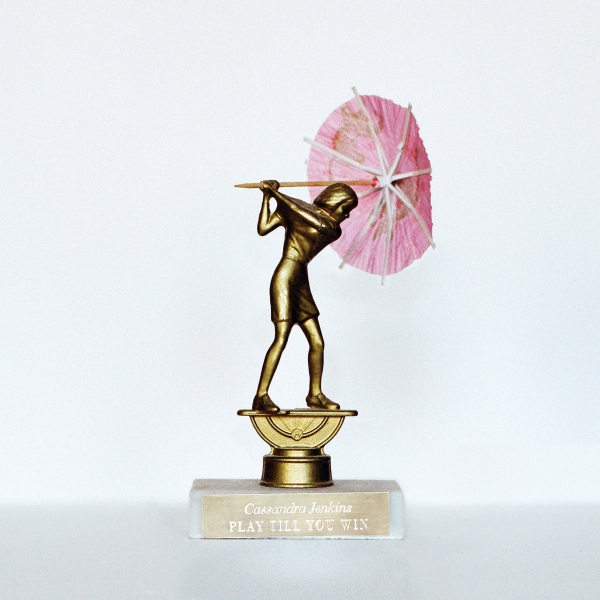 Few arcade games are as maddening as the claw machine. The player’s slow, measured alignment of the claw with his or her prize of choice is all too often rewarded with the equally slow and measured slipping of the prize from the claw’s grip as it rises from the plush morass.

The claw machine takes center stage in Brooklyn singer-songwriter Cassandra Jenkins’ “Candy Crane,” the lead track from her debut LP, Play Till You Win. Amidst a slow, hypnotic country swing, Jenkins lays the groundwork for her album’s theme of illusion and artifice versus reality, the claw machine promising no more than “plastic, plush, and candy” yet even those ephemeral joys continually slip from grasp. Indeed, Jenkins’s chorus of “pull ‘em in, pull ‘em in, play till you win” is more fitting for the poor sap playing the game than the cheap treats he’s pining for.

Play Till You Win arrives following a decade-plus period of playing local bluegrass circuits and upstate country fairs, as well as backing other musicians, most notably as Eleanor Friedberger’s bassist. Unsurprisingly, Jenkins steeps much of her material in a pastoral, country-flavoured style, particularly across the album’s first and final thirds, the former peppered with elegant slide guitar licks and the latter punctuated by flute and brass accents.

Across its entirety, Play Till You Win wears its ‘70s influences unabashed – the album was even mixed on 40-year old analog equipment and when Jenkins references the year 1971 in “Disappeared,” it hardly seems like an accident. Yet, on the most straightforward country-rock numbers, Jenkins’s songwriting is air tight and buoyed by delightful hooks and she and her band keep the playing loose, as on the nocturnal shuffle of “Tennessee Waltz” and the fragrant sway of “Jan Lee Jansen” and “Shame”.

Play Till You Win’s middle third ushers in a stylistic shift toward moody synths and looser, more nebulous arrangements. “Red Lips”s vaguely industrial undercurrent throws its striking imagery of idealized red lips and green eyes into deeper and more unsettling relief while “Honda’s Well”s hazy psych provides its admonition of flitting clarity and promise among the darkness a sepia-toned tension.

Jenkins’s ambitious aesthetic left turn is admirable, though the least successful patch of the album as it wants for the tightness of the other sections. Yet, it provides a blueprint of where Jenkins is looking to keep her sound moving ahead. Play Till You Win is a winning debut from an artist whose introduction is long overdue and who's bound to be a leading light in keeping traditional American music styles fresh and forward-looking.