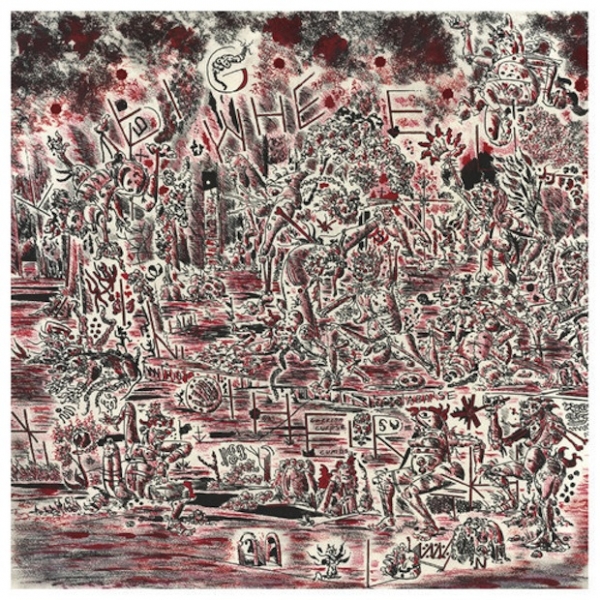 If you think about it in retrospect, the signs of fatigue were there at the end of 2011. By that point, nomadic singer-songwriter Cass McCombs had released two full length albums, WIT’S END and Humor Risk. While the former was a record up there with McCombs’ best work, Catacombs, and further testament to his rare talent for combining a keen sense of humour with his Dylanesque writing style, the latter felt like a step too far: moody, muddled and really quite a bit of a downer.

So it feels like a bit of a risk for McCombs to again release two albums in one year, this time in the form of 22-track double album, his seventh in total, Big Wheel and Others. It’s classic McCombs behaviour to be fair: contrary, enigmatic, humorous – something that matches the variety of songs on the album. Across 85 minutes he touches on country, blues, jazz, rock, folk and classic singer-songwriter, once again punctuated with comic touches and gnomic lyrics, but the problem is the length of Big Wheel and Others: it’s just too long to maintain any kind of consistent song quality. For starters, McCombs could have cut out the three snippets of film dialogue titled ‘Sean’; the dialogue comes from 1969 documentary Sean, featuring the thoughts of four-year-old Sean Farrell on drugs, the police and his hippy upbringing. McCombs contributed songs to the 2005 sequel, but that still doesn’t seem enough to warrant the short tracks on this record – there’s no real reason to have them here.

Of course, though, there’s plenty of brilliant moments from McCombs; beginning with the cyclical electric guitars and booming drums of the hypnotic country-dirt track ‘Big Wheel’, the finger-picking and lilting lap-steel ‘Angel Blood’ and the excellent acoustic strum and wistfulness of ‘Morning Star’ (which asks the question we’ve all posed internally at one time or another: “what’s it like to shit in space?”) it really is such a promising start, so it’s unfortunate that the next handful of songs are disappointing. ‘The Burning of the Temple, 2012’ is a dull bar-room waltz with lazy saxophone, ‘Everything Has to Be Just-So’ is an awful mess that continues on for eight minutes and ‘It Means a Lot To Know You Care’ is so wine-bar cheesy that it defies logic McCombs saw fit to include it.

These tracks are made all the more frustrating by the quality that surrounds them, like the daydream, thinking-aloud quality of ‘There Can Be Only One’ where McCombs wonders about love to a backing of gentle acoustic guitars and bongos, or the Primal Scream-esque rock out of ‘Satan Is My Toy’ and the gorgeous folk ditty ‘Aeon of Aquarius Blues’. There’s also a double-hit from two tracks called ‘Brighter!’; the first is McCombs showing off his higher register croon, and when the song is revisited later, it’s given over to the late actress Karen Black (star of Easy Rider, Five Easy Pieces and Nashville, who sadly died in August of this year) who had previously collaborated with McCombs. It turns out to be one of the best moments on Big Wheel as her beautiful voice effortlessly imbues the song with humour and pathos, and stands now as a tribute to her talent alongside McCombs’ performance at Black’s public memorial service.

It’s hardly a surprise that Big Wheel and Others is at its best when McCombs just keeps it simple with himself and his acoustic guitar, while the moments where he overreaches are the longer pieces without the focus found elsewhere. The humour, obtuseness and all-round quality of song writing aren’t ever going to leave Cass McCombs…just don’t try to do too bloody much, eh?