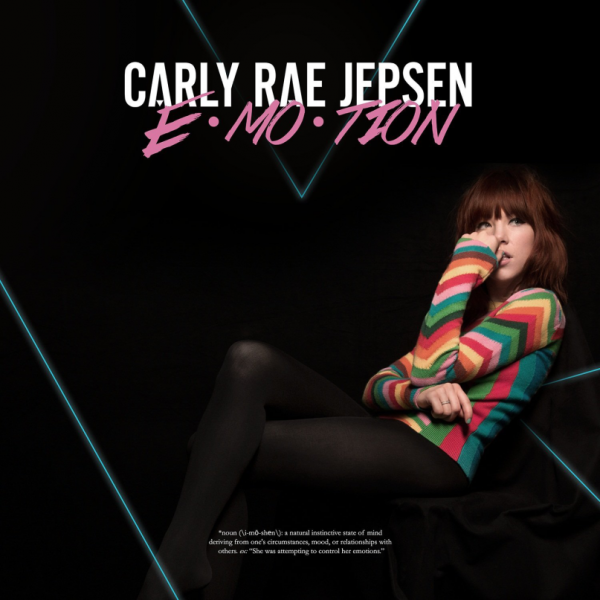 No music critic has failed to realise, let alone mention, the fact that Carly Rae Jepsen’s mega-hit “Call Me Maybe” put a worryingly-sized shadow over the rest of the Canadian Idol finalist’s material that also featured on the much anticipated second LP Kiss since its release back in 2012. But let’s be honest, it’s a good thing it did.

Kiss, forgetting momentarily its revered one-hit-wonder, was a paean to the middle-of-the-road electro-house, with its sickly synths and its tireless four-on-the-floor rhythm that has come to characterise youth-orientated pop music in the last decade. Aided in no short measure by the auspices of the one-track-mind - in more ways than one, it seems - of producer combo Max Martin and Dallas Austin, it was numbers like “Tonight I’m Getting Over You” and “Curiosity” that lead Caroline Sullivan for The Guardian to describe Jepsen as “divested of all emotion”.

As if in response, Jepsen’s 2015 follow up, Emotion, thankfully promises more sincerity - if not only from its name - and proves that she has more reason to remain at the forefront of mainstream pop than just off the back of “Call Me Maybe”. Max Martin remains on board, but has had to move over somewhat as a host of impressive names such as Dev Hynes, Sia, and Ariel Rechtshaid move in to lend their writing and production talents. Recorded in New York, Los Angeles and Stockholm, E.MO.TION has all the tenets of a successful pop record, but feels more cultivated than previous work.

Album opener and second single “Run Away With Me” announces from the start a record full of bangers, and while it remains relatively typical of Jepsen, it is the album’s title track “Emotion” which really pricks the ears; its syncopated rhythm and sharply palm-muted guitar work harks lucidly (perhaps too much) to girl-group Haim and their bouncy 80s style, and working with the girls’ own producer Ariel Rechtshaid no doubt aided the fruition of this sound. Strangely, it’s also possible to make out a strange pastiche to Depeche Mode’s “I Just Can’t Get Enough” on the guitar melody in the bridge.

The dry, 80s snare of “Emotion” continues into “I Really Like You”, the lead single and undoubtedly the album’s focal point, and which has that frustratingly catchy hook a la “Call Me Maybe” that will inevitably soundtrack many a Freshers finale this September. But whereas in the latter, where Jepsen’s hedging (‘maybe’) suggested coyness or uncertainty, she seems here to be sure of what she wants, not least from the obvious (and eventually, perhaps, irritable) repetition of “really” in the song’s chorus, but also from the her intimate admissions such as “I really wanna stop / But I just got the taste for it”. Naturally, it is peppered throughout with sexually suggestive lyrical content; it continues a tradition in youth-orientated popular music dating back to the 1950s - particularly in America - where a fine balancing act was at play of innuendos fruity enough to appeal to the new, strange impulses stirring in young teens, but clouded enough by equivocation and innocent sounding melodies so as not to tremble the guard of concerned parents. Of course, as time has passed this equilibrium has often veered intentionally far more to the former, as is the case with acts like Lady Gaga and her disco stick, but Jepsen remains parent-friendly, and not just because of the track’s video featuring the ever-lovable Tom Hanks.

Another surprise that hits hard and demands single-status (pun intended) is “Boy Problems”. Its Justice-style electro-glitches and slap-bass provides a more mature backdrop to the wonderfully youthful lyrics and their catchy melodies: “I think I broke up with my boyfriend today / And I don’t really care”.

That said, the nonchalance and easy-going nature of Jepsen’s lyrics do undermine to a fair extent the promise of emotion that the album’s title points towards, regardless of how cathartic melodies in tracks such as the huge closer “When I Needed You” remain. In any case, perhaps Motion would have been more appropriate a name; it aptly describes the development into the far more interesting pop artist Jepsen has become over the three years since Kiss.