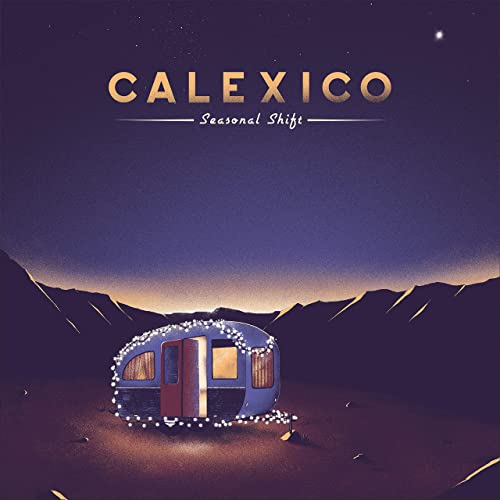 Just over a year has passed since Calexico’s last release – their second superb collaborative effort with Iron & Wine – but it feels like a lifetime. So when Joey Burns and John Convertino announced that their new album, the decidedly Christmassy Seasonal Shift, was expected to drop just in time for Christmas, fans were left with a mixture of excitement and bewilderment. As it turns out, there was absolutely nothing to worry about: Seasonal Shift is a fantastic example of how to do these kinds of records well.

According to the band, Seasonal Shift is “ a celebration of diversity and coming together”, and you can feel this sense of joyous communion in the album from the first note to the last. As Joey Burns explains it, single “Hear the Bells” is about the “traditions observed in Tucson around early November. [It’s] about holding time and space for memories.” It’s a beautiful composition, and lays the wintry foundations for the rest of the record.

Across the album, there are covers of Christmas classics from John & Yoko and Tom Petty (the criminally underrated “Christmas All Over Again”), but the greatest moments come from the tracks where the band relax into their comfort zones. The hilariously catchy “Mi Burrito Sabanero” is one of a handful of those customary Calexico Tex-Mex excursions, which have always been the crowning jewels of any Calexico album ("Roka (Danza de la Muerte”, anyone?).

In what has been an absolute disaster of a year, with bad news hitting the headlines on a daily basis, thank the baby Jesus for Calexico. They have come through with the recipe for a remedy to take your mind off the madness for an hour or so (or even longer, if you’re inspired to take a dip into their back catalog as a result!).

As a totally unsurprising side-note, Seasonal Shift also happens to be one of the best Christmas albums released in recent history, joining JD McPherson’s Socks and Bob Dylan’s Christmas in the Heart as holiday-time roots-rock essentials. Enjoy liberally and profusely this festive period!