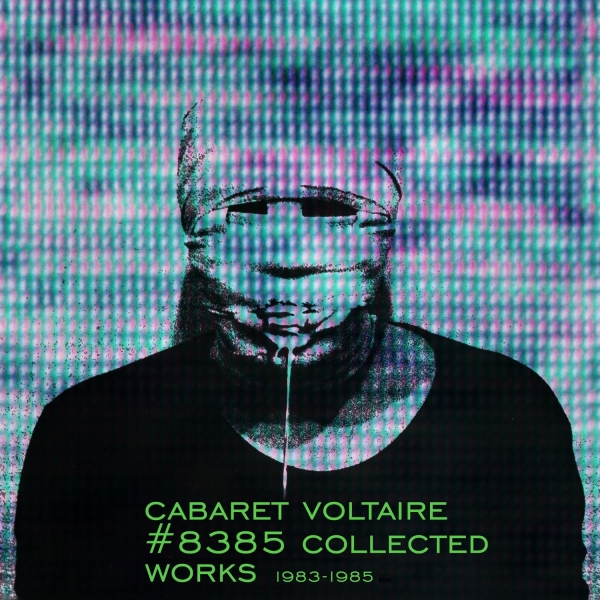 Staunchly anti-commercial, perennially perched on the brink of success and highly influential, Sheffield’s Stephen Mallinder and Richard H Kirk – aka Cabaret Voltaire – have now reached heritage status through the fusion of electronics and rock, something they strived to mould together since their inception forty years ago.

Intent on updating the sounds of Roxy Music and Berlin-era David Bowie, they re-imagined them as dance floor tracks made for seminal nightclubs such as New York’s Dancetaria and a pre-ecstasy era Hacienda, but with the unmistakable aural smog of both steel cities, their own Sheffield and Detroit. In fact, many of the more danceable tracks from this box set could easily be twinned with Juan Atkins’ seminal early electro rock project Cybotron.

This box set collects some of their more conventional albums released between 1983 to ’85 (1983’s The Crackdown, Micro-phonies from ‘84 and Drinking Gasoline & The Covenant, The Sword and the arm of the Lord, both from ’85). Giving a glimpse of the true dark side of early 80s electronic pop, they made bands such as Depeche Mode look like prancing idiots. The only thing that prevented a similar world domination style crossover was their preference for sound experimentation, eschewing big pop choruses about people being people, for songs about fucking. Even more commercial tracks such as “I Want You” or “Some Fascination” have a creepy edge that a pop careerist such as Martin Gore knew would damage the potential to make shed loads of money. Anyway, Cabaret Voltaire were much more comfortable in the company of fellow industrialists such as Throbbing Gristle or Clock DVA.

Relatively poppy songs such as “Sensoria” and “Kickback” are brooding with a dangerous edge and omit a chorus, but it’s not just doom smeared electronica; “The Operative” is experimental post-punk, “Theme from Earth Shaker” could easily find itself working on the flip side of Bowie’s Low album, and “Hells Home” and “Ship blow”’ are cacophonies of computerized feedback with violent slashes of guitar. Despite using recognisable four-minute song structures, these tracks act more like a stream of semi conscious musings, punk rock through machinery.

As the collection goes on, their flirtation with an occasional chorus or more recognisable tune is apparent, but the music becomes even less accessible. As Richard H Kirk starts moving towards the abstract electronica that became so synonymous with his solo work (especially the releases on the Warp label), Cabaret Voltaire become less of a band and more an experiment in sound. Tracks like “The Dream Ticket” and “James Brown” are more aligned with electro and funk than rock, whilst Eno-ish ambient soundscapes are evident on “Badge of Evil” and “Double Vision”. This contrary approach to music led to their failing to cross over, too rocky for electronic audiences, too dance based for rock and too damn weird to fit into pop music.

That’s not to say 8385 is without fault. At times, the experimentation leads to nothing more than studio meandering whilst the extended remix discs highlight the failings of many a remix from this era – just additional beats, primitive stuttering samples and not much else. Put these discs alongside Trevor Jackson’s exemplary Metal Dance 2 compilation from earlier this year and despite the styling of the content being similar, the difference in quality is crystal clear.

Minor gripes aside 8385 is a fascinating glimpse at what artists in the 80’s thought the future would sound like; this is the point where post punk electronica such as New York’s Suicide ends, and proto industrial-goth artists such of Ministry and Nitzer Ebb begin. No Cabaret Voltaire, no God Machine or Nine Inch Nails, no Prodigy or Underworld. The scope of their importance is huge.