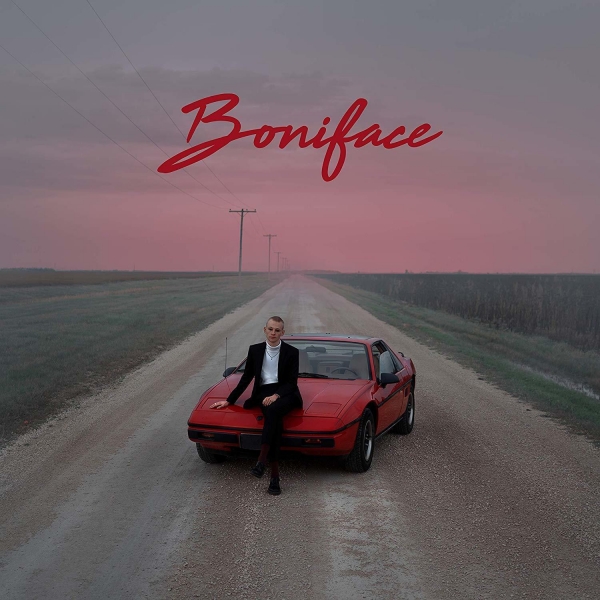 Boniface’s eponymous first LP is all at once a collection of shimmering synth-pop masterpieces and soul-shaking ballads.

Micah Visser, the mind behind Boniface, is a strategic and eloquent storyteller. The album is an unguarded, autobiographical account of Visser’s most precious and challenging moments. The music doesn’t just shine, it reveals the individual struggle of “growing up, moving on, and everything that happens in between,” says Visser.

The album opens with “Waking Up in Suburbia,” a minimalist piano ballad, peppered with touches of strings. The star of the show? Visser’s emotional melody and visceral lyrics. They sing of the mundane, but with a poetic and sentimental edge that makes suburbia feel like the most magical place in the world.

Track two is previous single “I Will Not Return as a Tourist.” It’s the oldest song on the album and a sentimental favorite of Visser’s. “I feel like this was the first time I tapped into something. Since then it’s really lived up to its name - opening a lot of doors for us and lifting me out of some really dark places.” The song starts out slow and serene, but has a dramatic finish that leads perfectly into their fast-paced synth-pop.

“Keeping Up,” and “Dear Megan” are the kinds of songs that you can’t help but dance along to. “Keeping Up” is the encouragement that we all need to hear, because life can be messy and sometimes hanging in there isn’t easy. “Dear Megan” is an urgent apology. Visser sings, “Dear Megan, I'm sorry. I know that I’m always saying it but this time I mean it, I’m leaving for Los Angeles today and I need to know if you think I’ve made a mistake.”

“Oh My God,” is an ode to the underappreciated. “You’re the film nobody saw, they like it now they’re hypocrites. And you’re the shit nobody gives,” sings Visser.

The album also features new songs, “Your List,” “It’s a Joke,” and “Stay Home”. “The songs we’ve saved for the album are some of my favourites,” says Visser. “They occupy such an important corner of the record that hasn’t been communicated through singles yet and I’m so excited to share them.”

“Your List,” tells the story of the naivety of falling in love. Visser sings of borrowing their brother’s car on the weekend and watching their significant other put on their makeup, but also of splitting the art that they bought when they inevitably break up. In a relationship, you might think you’re the lucky ones, but Visser warns that love can be intoxicating. It has the power to shield you from the truth.

“It’s a Joke,” mashes shoegaze, alt-rock, and synth-pop. Over a pulsing bassline and glistening synths, Visser recounts how it feels when everything around them starts to go wrong. It’s not always easy to cope when everyone around you is laughing and you can’t even manage to break a smile.

Visser doesn’t need a piano to perform a ballad. They lend their glistening synths to “Stay Home,” a compilation of little moments, from waking up with bed head, to stepping outside into the cold on New Year’s Eve to answer a phone call.

Visser closes their debut record with “Waking Up in Suburbia’s” sister song “Making Peace with Suburbia,” another striking piano ballad that neatly bookends the beginning and end of their own personal story. As the track builds over a bridge, Visser admits, “I’m saying that I want you back but I just want to feel young and I just want to feel loved, and if you gave me the chance I would just let you down all again.” Here, the pain in their voice is just as raw and real as their poetic lyrics.

“I’m generally a very guarded, reserved person so the vulnerability of sharing these songs has always been the biggest struggle for me. A lot of the album was written without the intention of ever leaving my bedroom, so the process of putting it out there just feels really raw and really terrifying sometimes,” admits Visser. “Worth it though.”