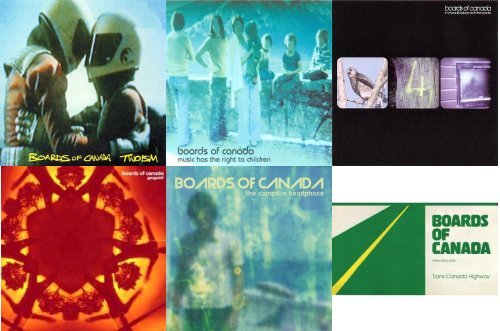 Record Store Day, 2013. A mysterious vinyl, titled ——/——/——/xxxxxx/——/—— appeared in a New York music store. It contained a brief burst of audio. One of six such fragments waiting to be uncovered. Each recording contained a numeric code. When combined and entered into a website, these codes revealed a video, announcing the release of an album: Tomorrow’s Harvest by Boards Of Canada.

This bizarre alternate reality game and the release of said latest album has arguably brought Boards of Canda (BoC) to the attention of a whole new audience. The success of Tomorrow’s Harvest prompted their record label Warp to release their three previous albums, Music Has The Right To Children (1998), Geogaddi (2002) and The Campfire Headphase (2005) on vinyl next week (21st October), with the EPs Twoism (1995), Hi Scores (1996), A Beautiful Place out in the Country (2000) and Trans Canada Highway (2006) set to be reissued next month (18th November).

Boards of Canada have been around for many a moon, since the late 80s in fact. Although, it’s entirely likely a certain kind of listener mightn’t have heard of them until earlier this year (it has, after all, been the best part of a decade since they last released a record). They eschew publicity for the most part; apart from the genuinely quite ingenious and unconventional sort, interviews are few and far between. Live shows are even rarer. The group is formed of two Scottish brothers, Mike Sandison and Marcus Eoin, a pair whose music has become inextricably associated with the iconic record label, Warp, and a constant yet self-effacing presence in the world of British electronica for decades.

So, why suddenly court publicity, with posters on the London Underground and interviews with The Guardian? It’s highly uncharacteristic.

One answer is sheer good timing. With the resurgence and fusion of EDM genres in the post-dubstep musical landscape and the ambient, dream-like soundscapes of chillwave, BoC’s minimalist-style distillation of ideas and intricate tapestries of found sound could not be more “in” right now. This is the opportune moment to finally reach out and bring their music into the lives of a whole new generation.

The question of time and context is inescapable within the music of Boards of Canada. Themes of nostalgia and distorted temporalities are common in their work. Vintage synths create a warm, sentimental glow which is simultaneously juxtaposed with the suspension and atemporality conjured by the hypnogogic swirling of timbres and melodies. However, it’s not only the work of BoC which is tied to these themes; the band’s reputation and legacy is too.

Most iconic bands release perhaps one or two seminal albums, game-changers at the time. Not so with Boards of Canada. All of the records set for re-release this autumn seeped gradually into our musical collective consciousness, without much ado. Crucially, these recording are not simply groundbreaking or revolutionary given the context in which they were originally released: they sound as if they could have been composed yesterday. A remarkable feat, considering that Music Has The Right to Children was released 15 years ago.

The duo’s obscure sources of inspiration, ranging from the documentary films of the National Film Board of Canada (from which their name is derived) to old skool Sci-Fi soundtracks, lead them to pioneer genre-defying electronica which somehow hangs suspended outside of time, space and – most importantly – musical trends. The duo have talked about how evading categorisation and resisting fads and fashions is a crucial part of their strategy for making music: in fact, this is one of the reasons that their working environment remains rural.

It is difficult to overstate how crucial this resistance to modulations in the musical landscape is in creating the unified and cohesive identity which marks the BoC oeuvre. Even tracks that are infused with the sounds of nineties dance culture – take “Basefree” on Twoism with its pounding bass and drums for example – are dragged from the confines of the warehouse rave, infused with sinister and ethereal synths and transformed into pieces that brim with an atmosphere that defies any specific environment or cultural context. Free is the word. It’s at these moments when BoC’s seemingly laid-back and mostly tranquil vibe mutates into something that seems as playfully anarchic as free jazz.

Yet, diehard Boards of Canada fans will know that their music is far from unstructured and chaotic, as their second album Geogaddi shows. “A Is To B as B Is To C” is all about structure and sequence; three consecutive ideas that flow into each other and expire within 1:41. “Music Is Math” also hints at the band’s obsession with mathematics.

Geogaddi is sometimes described as one of the darkest of BoC’s releases. The spiralling, fractal beauty of ‘Music Is Maths’ is quite intense – and if listened to on repeat would probably be capable of tipping anyone over the brink into madness, at least for a few hours. “Music Is Maths”, “The Smallest Weird Number” and “Gyroscope”, which even includes samples of a distorted voice counting to ten, not only overtly hint at the band’s infatuation with numbers through their titles and samples, but sonically illustrate a kind of fractal beauty through their repetitious, cyclic nature. It’s pretty difficult to capture the sound of numbers, but on Geogaddi, Boards of Canada get fairly close.

Don’t be alarmed though, it’s not complex concepts and abstracts with Boards of Canada. BoC’s master stroke is to be able to interchange registers, switching from sinister to nostalgic, from claustrophobia to the simplicity of natural beauty, without losing site of their sound. Take “Ataronchronon” on The Campfire Headphase, named after one of the indigenous peoples of what is now Canada. In essence, it is just over one minute of synthesised blur. If I had to give it a meaning, I would say that this auditory fragment is a perfect exemplification of the tragic struggle of this particular group during the difficult period of colonisation. After this bleak interlude, comes “Hey Saturday Sun”, which is just as joyous and optimistic as it sounds, with acoustic guitar and flute. It’s music for lounging. Diverse as these tracks might be, this change of pace is pretty typical of the very deliberate juxtapositions that run through the band’s work like a golden thread.

It’s not often that there is occasion to dissect a band’s corpus in such an in-depth way. However, on the rare occasion that is does happen, it is hard to separate the music from its creators. For many other bands who had enjoyed a career spanning over two decades, discussion of their back-catalogue would never happen without reference to the group’s various personalties, their private lives, drug problems and any infighting that has happened along the way. Boards of Canada’s music feels almost uniquely untainted by the cult of personality which dominates the music industry. BoC are not faceless nor are they without an agenda – as “Energy Warning” from Geogaddi goes to show, sampling a child speaking on the issue of renewables – but the music, it’s structures and themes, remain the central focus. Not the people behind it.

Undoubtably, these re-issues will bring the band the widespread acknowledgement they so deserve. No doubt they will go on to influence even more artist who are only now emerging, in addition to those who have already been enthralled by the dream worlds weaved by BoC. It would be possible to think of all kind of later analogues and successors who, whether they know it or not, owe a debt to Boards of Canda. Artists as diverse as Monokle, Mount Kimbie, Teen Daze and even Poliça all bear resemblance to BoC in one way or another. But that’s not really the key issue here.

The forthcoming reissues of the BoC back-catalogue should not simply be considered a catalyst for a re-assessment of their impact on music. Their legacy should be recognised, as it is significant – even if they have been relatively elusive for the majority of their career. But the most important lesson to learn from Boards of Canada is that: a) a little mystique can go a long way, and b) making music how you want to make it, regardless of what everyone else is doing, can bring you success. Listening to all of these records as they’re about to hit our shelves once more, there is one word to describe them: monolithic. That’s not to say they all sound the same. It means that this is a band who know their sound and know who they are. It means every single release bears a clear hallmark: BoC.