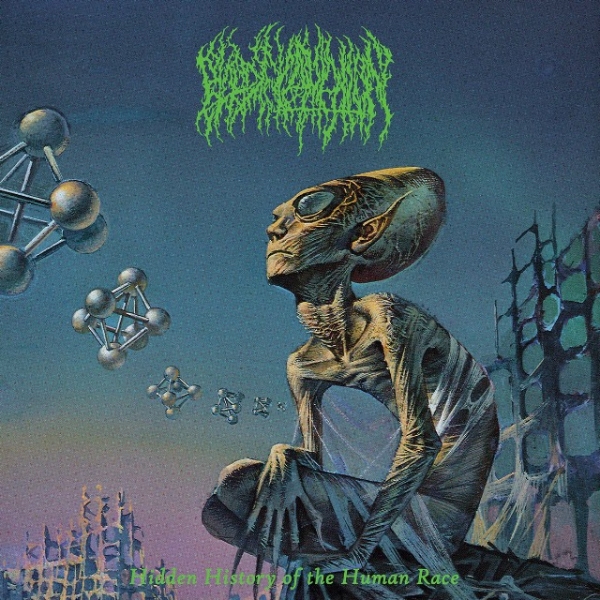 We are mere weeks away from Christmas, and one week further still from the beginning of a new year, and a new decade. You’ll have, presumably, begun to finalise your ‘Album of the Year’ lists – perhaps even your ‘Album of the Decade’ lists – and you’re just about ready to begin winding down for the winter, thank you very much. You’ll be making your gift selections known to relatives, asking folks what their plans are for the festive season and beginning to feel the creeping dread that accompanies an unwanted office ‘get-together’.

For today’s consideration, we have the new album from Blood Incantation, Denver’s very own answer to one of life’s greatest questions: “What would Morbid Angel sound like if they didn’t turn shit after Domination?”

Do you need an original, inventive Christmas gift for your loved ones? Do they enjoy horror movies but spend too long listening to Disney music? Are you sick of giving people average, forgettable gifts? Why not try something different this year?

Hidden History of the Human Race is four tracks long, and is as mind-meltingly, neck-achingly, head-bangingly perfect a metal album as you’re ever likely to hear. It’s the aural equivalent of watching Aliens in a sensory deprivation chamber, off your nut on acid: Space is where the action happens, but it’s not the space you tell kids about. It’s hostile and desolate and cold and full of horrific alien life that’s hell-bent on ramming its egg-depositors right down your throat until you burst from the inside. Blood Incantation conjure these kinds of visions, those claustrophobic moods, those same visceral reactions, and more besides.

They have forged a specific style out of the ashes of classic death metal, and it’s surprisingly effective in a modern context. They take the widescreen cinematic scope of Death, the unflinching grimness of Obituary, the intensity of Cannibal Corpse, the endlessly serpentine song structures of Cynic and Atheist, and the depths-of-Hell misery of prime Morbid Angel (lots of Morbid Angel flavours here). But they also seem to have been listening to other progressive-minded metal bands, like Gojira and Mastodon, both of whom have incorporated cosmic themes into their work through extended, almost ambient stretches of desolate emptiness amongst galaxies of blastbeats and thunderous riffs.

The album starts with the monolithic “Slave Species of the Gods”, which alternates between sledgehammering doom riffs and lightning-speed, galloping thrash riffs, before descending into that classic Cynic/Atheist realm of chaos, where riffs join each other then splinter off, forging new paths into the depths, all underpinned by roaring bass and relentless drumming. The solos are the aural equivalent of broken shards of light from an unknown spectrum being blasted into your parietal lobe, altering your concept of what’s real. Lovely stuff!

As “The Giza Power Plant” opens, it’s coursing with a fire-burnt rawness, and it’s filled with that kind of sheer fucking rage that you’d be expecting from early Entombed or early Gorguts. But then it opens, laterally, into a progressive, spiralling and strangely open second phase that builds, gradually, into a blossoming crescendo of riotous intensity.

The third track, “Inner Paths to Outer Space”, is the proverbial calm before the proverbial neutron star collapse. It starts completely ambient, with echoes and scrapes and throbbing emptiness. Then a steady, rolling bass groove builds up from nowhere, before a positively jazzy drum line rolls into its orbit. Guitars join, then the patterns shift into a more solid structure, as though you were hearing planets align. It gets darker, denser, more claustrophobic before it collapses into a sickening death metal groove, leading towards an explosive final crescendo.

To close the record out, Blood Incantation go broke. “Awakening From the Dream of Existence to the Multidimensional Nature of our Reality (Mirror of the Soul)” is, at 18 minutes, a phenomenally draining endeavour. The riffs here are ratcheted up to maximum intensity, as though you were entering the final level of an impossible game where you’re told there’s no escape, and you realise that there never was. Blood Incantation spend the previous three songs lulling you into a relative state of comfort before unleashing every tool in their arsenal on you over 18 brutal minutes. It’s unbearable, crushing and demoralising – which, one would presume, means it achieves everything they wanted it to. “Awakening...” is a breath-taking demonstration of virtuosity from a band operating on an almost mythic level. Metal just doesn’t get any better.

Hidden History of the Human Race isn’t just one of the best death metal albums of the year, it’s one of the best metal albums of the entire decade. Stripped of its reductive metal assignations, it’s also one of the finest psychedelic albums of the decade – it’s almost as though we lull ourselves into the idiotic notion that the only albums that can be called ‘psychedelic’ are the ones that sound like the good trips. HHotHR is a bad trip indeed – imagine desperately trying to float away from the desperately sick hunger of a black hole’s gravitational pull. And failing.

Blood Incantation do not make music for the faint-hearted, but we’re not living in faint-hearted times. So why not surprise your family and friends, and give the gift of cosmic terror this Christmas? You won’t regret it.

The Ghost of Christmas Yet to Come.