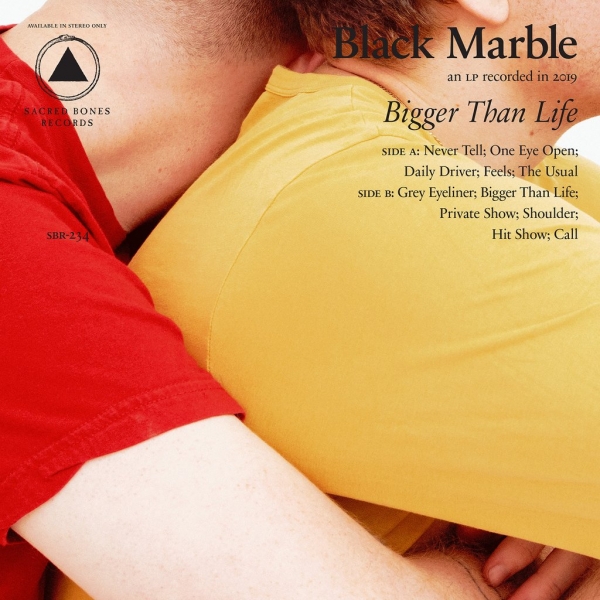 A progression is emerging now that Black Marble is on its third album: from A Different Arrangement in 2012 to It’s Immaterial in 2016 to the new Bigger Than Life, musician and producer Chris Stewart has shed another gauze layer of protective distance.

Stewart’s relocation to Los Angeles, which preceded the creation of Bigger Than Life, surely has at least something to do with Black Marble warming up the colder corners of its bedroom post-punk. The opening seconds of “Never Tell” sound like the soundtrack of a forgotten ‘80s techno-thriller playing on VHS down a hall, but it gradually steps into a more present foreground. Retro equipment and reliance on reverb are still central to the character of the music, while Stewart’s songwriting has wandered deeper into pop-touched territory without feeling pushed there. If he can keep up this semi-restrained pace, by the fifth album he can “go pop” without having to formally declare it.

The aesthetic values of hypnagogic pop continue to pay dividends through artists like Black Marble. Songs like “Grey Eyeliner,” the title track and the closing “Call” pull up memories as if they had always been imprinted on them and weren’t brand new. The induced sense of nostalgia in the listener may be artificial, but it’s rendered with largely organic instrumentation, recorded on a computer but not played on one. Stewart’s lyrical reflections, despite the occasional “I used to” or “I wasn’t,” aren’t predominantly rearview either. He’s just as often looking forward, as he does on “Feels”: “See things the way they could be/Waiting on the sunlight to shake free.”

Repeated plays also reveal the side of Bigger Than Life that wants to dance, with its persistent electro-pulse, repeating hooks and a tracklist built to withstand being scrambled on shuffle. The eleven songs here are tidy and self-contained but not sealed. The possibilities for Black Marble continue to open.