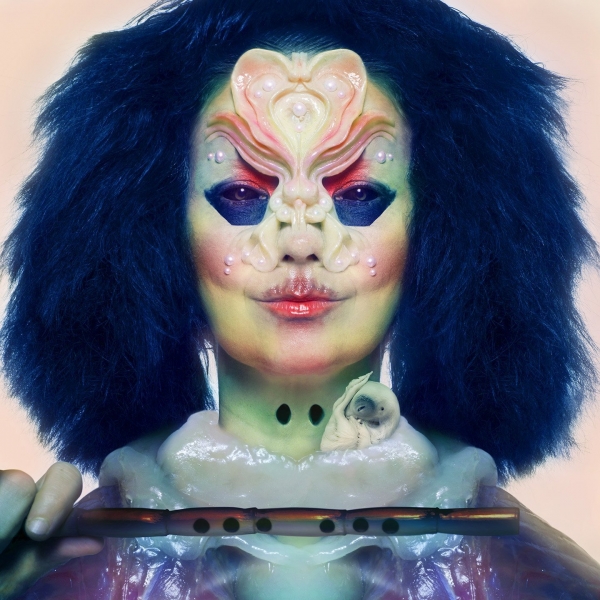 Björk Guðmundsdóttir’s world has always been one of her own. For her 10th studio album, the prolific Icelander welcomes us into her Utopia – and leads us, on tip-toes, through her art-pop influxes and electronic gauzes, gently guiding us towards an understanding of the remarkable sonic space she continues to inhabit.

While Vulnicura, the ever so vulnerable 2015 release which detailed her break-up with long-term partner Matthew Barney, was at times painfully intimate, this new offering is gentler and more hopeful. The strings which stung with aching are replaced by an airier woodwind ensemble, and the record sounds more willing to accept spaciousness. Utopia is indeed the heaven to Vulnicura’s hell.

Through and out the other side of hell, Björk finds relief. “My healed chest wound transformed into a gate,” she sings on single “The Gate”, referencing Vulnicura, a word of her own imagining, meaning ‘The Cure for Wounds.’ With every new breath, her syllables unpeel themselves. Her voice reverberates around bird-song and this record feels so close to nature that Björk cannot be doing anything other than stepping over overgrown tropical plants, or at least lying on a cool forest floor, as she sings.

Are these synths acting as birds, or birds acting as synths? Either would be possible, particularly with the influence of co-producer Arca (Alejandro Ghersi), the Venezuelan musician and producer whose twisted impression of electronica powders many of these songs. Notably, this is the first time Björk has collaborated with one individual for an entire record.

While she collected some her own field recordings, much of the birdsong on Utopia is sampled from David Toop’s 1980 release Hekura. His sounds come from Venezuela in the 1970s, a neat connection to her co-producer’s homeland, where Björk has said the birds “sound like ‘70s analog synths.”

More haunting still is the choir of woodwind – 12 female flautists from Reykjavik – which opens the title track, the melody fittingly sprightly and welcoming for a mystical world. The use of flute is crucial. Promotional images for this album show the musician, face heavily made-up, and often masked, dressed in flowing coloured velvets playing a wooden panflute. Björk learnt the flute as a child. 10 albums deep, and the instrument continues to haunt her songs with characteristic grace.

The panflute of “Features Creatures” haunts and brays like nowhere else on the record. Soon it becomes a synthed-up cosmic whirl of a sound, stunning in its contrast to the devastating lyrics: “When I spot someone / Who is same height as you / And goes to same record stores / I literally think I am five minutes away from love.” Though optimism rings out on much of this record, Björk’s sincere emotionality – and willingness to accept that the past still affects her day-to-day steps – pervades a bright humanity.

Flute melodies, too, form the backbone of “Courtship,” a tune with a raspy percussive beat which dissects the emotional after-effects of online dating. Never too far away from reality, despite maybe seeming as though she always has her musical head in the clouds, Björk dubbed Utopia her “Tinder album.”

For all the beauty that lies in the airiness of the flute, “Losss” does a wonderful thing to dirty up its sound. In between chimes and the clear buoyancy of a flute’s timbre, lie cloudy breaths and murkier synth dressings. The resultant track shudders with glassy distance.

In a recent BBC 6Music radio interview with Lauren Laverne, Björk listed ANOHNI and Rihanna, amongst others, as musical inspirations. Parts of “Sue Me” – an explicitly personal track which details Björk’s legal battle to gain custody of her daughter after her divorce – balance a Rihanna-like jolt for an R&B rhythm with the defiance of ANOHNI. Here more than ever is Arca’s production apparent, as clusters of grit fall upon this track.

Björk’s Utopia is as much about attempting to reach paradise as it is setting up camp there. On her longest album to date, she has given herself the space to embrace the natural world as well as continuing to reckon with her past. She knows she must stop that soon, though. “Imagine a future and be in it … your past is a loop, turn it off,” she sings on closing track “Future Forever.” For all that glistens, there is still work to be done.