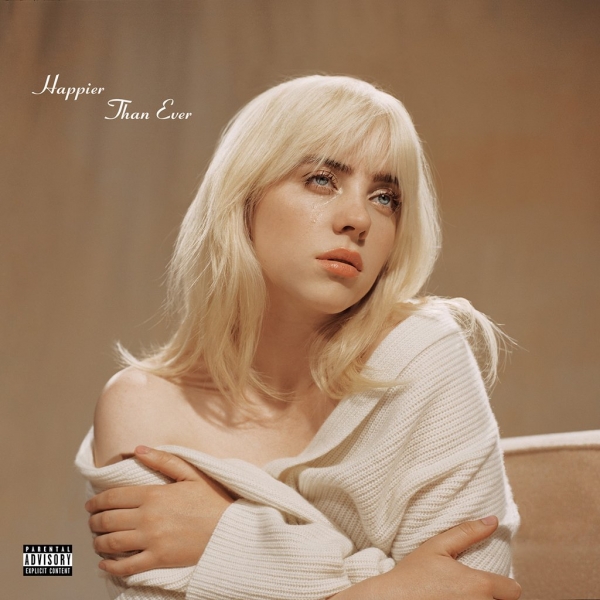 Billie Eilish is quite rightly one of the biggest artists in the world right now, and despite its flaws, Happier Than Ever - and Eilish - will continue to break records.

Unlike her debut album, which Eilish recently declared she “hated every second” of making, Happier Than Ever was created in solitude and isolation with her longtime collaborator and brother Finneas. Left to their own devices, with no outside influences, the pair have created a sprawling second album heavy with ballads.

Packed with slow burns often blurring into each other, it’s a record to sit with and study - if you’ve got the time. Listen out for the intricacies of FINNEAS’ production and take stock of the lessons Eilish shares with her lyrics. However, don't let its beige exterior fool you, beneath its surface each of these songs carries a story with heart.

Having already undergone many transformations, Eilish's career can still be considered relatively short. Lest we forget the soothing calm of her pensive 2015 debut single “Ocean Eyes” transitioning swiftly into the muffled distortion of her biggest hit, 2019's “bad guy”, as she evolved into pop’s antihero.

But her fans haven’t been as enamoured by her latest shift in direction. Eilish has already called out those claiming she’s in her “flop era” on TikTok, and while they weren’t wrong to lament the lack of ear-bending left turns Eilish and her brother usually conjure, nothing the sibling duo have shared has been objectively bad, it’s just relatively tame in comparison to their previous work.

On Happier Than Ever the tempo never quite reaches fever pitch; instead, Eilish is content with the tranquillity of tried and tested methods - tentatively pushing boundaries, rather than cranking the distortion up to 10. There are of course moments where Eilish pulls it out of the bag, but where WHEN WE ALL FALL ASLEEP, WHERE DO WE GO? felt entirely singular, Happier Than Ever doesn’t feel nearly as intimately unique.

Standouts include the early single “Therefore I Am” and hot-and-heavy curveball “Oxytocin”. The latter is a club-ready whisper-pop anthem that sees FINNEAS channel Timbaland, with Eilish invoking the spirit of Nelly Furtado’s 2009 opus Loose. It sizzles where other more playful attempts merely fizz.

Eilish’s musings about fame catching up with her and creating chaos are best expressed with the droning synth stabs of the opening track “Getting Older”. It’s a familiar story for fans who have witnessed Eilish’s exponential trajectory as followers on social media, readers of interviews and viewers of content like her annual Vogue interviews or documentary film will attest. For the uninitiated, it’s a wake-up call and reminder of the realities so many artists face.

Titular track “Happier Than Ever” delivers the album’s biggest surprise by evolving from a sleepy ukulele ballad into a blistering angst-fuelled rager. Those final two and half minutes are not only a highlight of the album but a highlight of Eilish’s entire discography thus far. Proving that if they wanted to Eilish and FINNEAS could easily create the radio-ready hits that their contemporaries pump out, but they just don’t need to.

Whether they’re channelling disruption or embodying conformity or - in the case of Happier Than Ever - just making music for sheer enjoyment, Eilish’s loyal fans will surely follow. Eilish and FINNEAS are at the top of their game, wielding incredible power as they decide how to shape the future of music. Will they dive further into genreless dystopia or opt to shake things up again?