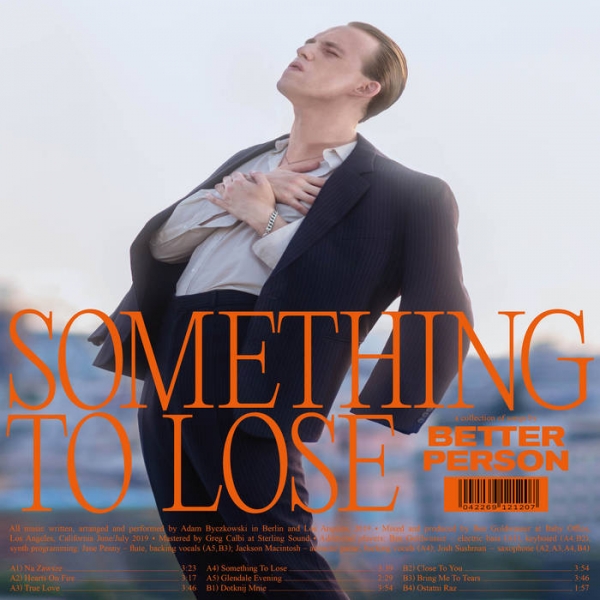 Thick with yearning and melodrama, Something to Lose is the debut album from Better Person, the pseudonym of Polish singer Adam Byczkowski. Since 2015, Byczkowski has released sporadic transmissions of heartache from his base in Berlin – singles and an EP, 2016’s It’s Only You, that experimented with sophistipop production and instrumentation. This debut full-length project crystallises his aesthetic and his contemporary balladeer persona, aligning him with other Berlin-based synthwave artists such as Molly Nilsson and Sean Nicholas Savage.

From the start, Something to Lose is evidently a more elegant, expansive articulation of Byczkowski’s out-of-time sound. Opener “Na Zawsze” (“Forever” in Polish) is slow-moving and lush, like a ream of chiffon – reminiscent of the ballads of Roxy Music, or the recent sonic worlds of Perfume Genius. It’s something of a recalibration of longing: Where 2017 single “Zakochany Człowiek” (“A Man in Love”) was self-contained and tentative in its melancholy, here, Byczkowski’s voice and production both soar – in a step further towards the pristine sound of artists such as The Blue Nile and Aztec Camera.

In recent years, it’s become almost tiring to be confronted with tropes of ‘80s synth music in underground pop, but Byczkowski has a clear commitment to the sound beyond using it decoratively, or as a signifier. His iterations of synthwave have conviction, sounding extravagant and expensive, and are punctuated with unusual choices. “Dotknij Mnie” (“Touch Me”) begins as a waltzing dirge, expanding to encompass – of all things – reverberating church bells and a whistling solo. “Glendale Evening” marks the midpoint of the album with a strange instrumental, beginning as a piano interlude, before twisting into a much darker synth drone, decorated with quivering bell-like chords. It’s unexpected, but Byczkowski makes it convincing.

Even the songs that aren’t as sonically rich or expansive have a well-cultivated sense of drama. Over the vamping organ of “Bring Me To Tears”, Byczkowski begs his lover (or the world at large) for a transcendental emotional experience (“Throw me in the ocean / Dump me in the sea / Crush my heart to pieces / I want to try something I can feel”). On the relatively breezy title track, his vocals are uncharacteristically sober in the verses before soaring into unrestrained territory. The structure of the album also lends itself to a dramatic narrative: a short set of eight songs ending with “Ostatni Raz” (“Last Time”) – a reflective outro complete with sax solo, that conjures the image of a crooner walking off a smokey stage. In a scene over-stuffed with ‘80s-throwback melancholia, it is Byczkowski’s ambition, scope, and keen sense of melodrama that set Something to Lose apart.