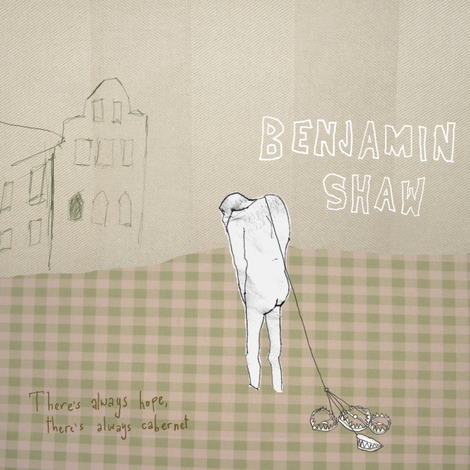 As the year wears on and the nights draw in, so Benjamin Shaw offers up a debut album to provide succour and solace through the darkest weeks ahead. Well OK, perhaps not – but it is a rare thing, a record that offers a venting of desolation alongside odd doses of hilarity. The consequence is a magnificent shambles of an album, which at times has one foot in noise and the other in performance art, straddling the two slightly apologetically. Generally, though, it’s just a man with a guitar and an insatiable appetite for droning despair; singing solitary, stream-of-consciousness, broken folk, pricked with acerbic spikes of wit. Like a more sardonic, one-man Bright Eyes, Benjamin Shaw must be the perfect signing for a label called Audio Antihero.

They say it’s the hope that kills you, but I daresay Shaw’s music would still sound pretty beaten up without it. Indeed, in identifying that hope is not the last recourse while the promise of alcohol remains, you worry that both belong in Pandora’s Box. The touted optimism is in fact least inconspicuous on the tongue-in-cheekily titled ‘The Birds Chirp and The Sun Shines’ but, counter-intuitively, he sounds more at peace on the closing ode, ‘Hulk’ (clue: it’s not about the FC Porto forward), detailing his frustration with being unable to channel ample rage to much effect.

Shaw seems to work to his own code and, as detailed on ‘How to test the depth of a well’, its rules include: “You shouldn’t dream of being younger, it was never that nice at all / And you shouldn’t make up stupid songs, just to get applause / And you shouldn’t blame it on the Tories even if they’re vile / And you shouldn’t fill their lungs with water, just to make me smile”. These lyrics are enveloped in a swampish assortment of unrefined noise. It’s an arresting combination, if you have the patience to wallow in the mire of sonic experimentation. To begin with, you’re on the edge of wondering whether the whole thing won’t collapse in on itself, until a sense of equilibrium is established over successive instrumental passages that are, however, less riveting than the confessional tones established in Shaw’s singing. These are fractured fragments of a life plagued by bloody-minded self-doubt and crippling self-awareness. “I never wanted to stare into the abyss”, he declares, and if Josh T. Pearson had been born in Blackpool he might have made this record, too.

However, it’s Shaw’s obsession with extraneous sound (there’s a choral sigh tracking through much of the six-and-a-half minute ‘Somewhere Over the M6′ for example, and ‘Hey, Where’s My Deputy’ contains a vacuum cleaner) that leads warped and careworn songs into more precarious territory. Rather than purging such urges from his system in the softly unruly fifty-second title track that starts the LP, the recurring static gives rise to an incredible sense of respite during the interludes: like the first blinked instants of lucidity after a lost weekend, or your flatmate popping out for some milk. The frayed fabric of the album is the canvas for Shaw’s cathartic self-portraiture-cum-singing, delivering a bleak vision cast in noise. ‘Interview’ is particularly fragile, a strand of song unravelling, mangled, teased and drawn. This anecdotal, choking track serves as a tightrope for the album, because if you make it across, nothing again comes so close to breaking point. “I’ve got an interview / Tomorrow at ten / For a job I’ll hate / I get to pretend” he falters, his first steps along the high wire after a minute or so of jumbled samples and dawdling, dragging guitar. You wouldn’t want everyone (or, frankly, anyone else) to sound like Benjamin Shaw – but I’m delighted someone does.

It says much about Shaw’s talent that he could make a record that so adheres to his uncompromising intentions, with such a concentration of the self, and still produce something this coherent and, well, listenable. Depressive perhaps, but hardly self-pitying; and very deliberately executed with both a delicacy that shows he cares and a rawness that adds a sense of spontaneity. There might even be distilled elements of a fine Brit-pop-folk record inside Benjamin Shaw, like ethanol in cabernet – but how much more arrestingly original is this sprawling, uncommercial concoction? Besides, I suspect that’s just not an aesthetic that would interest him. “I know someone who is friends with Noah and the Whale”, he name-dropped recently on Twitter. “He is an idiot.”