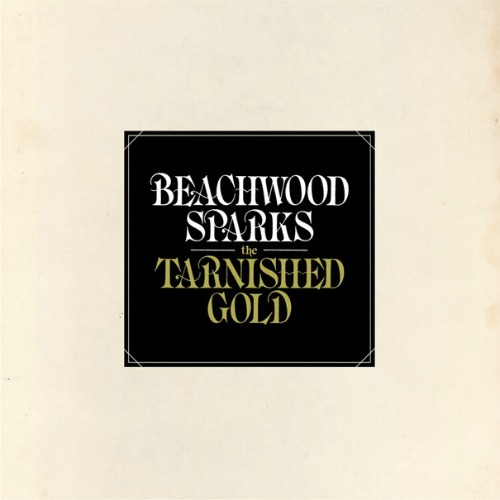 Beachwood Sparks helped usher in a fresh return to a bygone era in the music industry with their stellar trilogy of early-2000s Sub Pop offerings, highlighted by their relaxed psych-pop masterpiece, Once We Were Trees. Suddenly, the radio and internet was awash with band after band featuring their own wistful brand of melodic, breezy pop songs drenched in vocal harmonies and leisurely musical arrangements.

But just as that scene was wholeheartedly being embraced by the music community at large and overrun with purveyors of a similar retro Americana sound, Beachwood Sparks quietly disappeared from sight with the hushed goodbye of Make The Cowboy Robots Cry in 2002, before ever fully getting their due. Now, after a 10 year absence, the amiable alt.country sextet are back with The Tarnished Gold, a highly satisfying album which finds the band sticking to the same sedate music style and laid back musical arrangements that they honed together over a decade ago.

The record starts with the gloriously restrained ‘Forget The Song’, whose lyrics (as well as the title itself) contain many subtle jests about the struggles of learning to be a band again, as well as the challenge of dealing with any lofty expectations as the spotlight refocuses on them after all of these years. Things pick up considerably on the aptly (and cheekily) named ‘Sparks Fly Again,’ which finds guitarist Dave Scher warmly stating “This goes out to my good friends”, before the rollicking, upbeat track kicks in. It’s a delightfully inclusive number for those who have supported the band in the past, and also serves as a bold announcement that they aren’t quite finished just yet.

‘Mollusk’ proves that the band aren’t afraid to rekindle their robust harmonies despite modern music’s current over-saturatation with that vocal style, and the muted surf rock guitar riffs give the song a plaintive, old fashioned appeal. The title track is a rich, elegant number that speaks to how the things we search so hard for in life have typically been right at our sides the entire time. It also is a clear proclamation about how the band aren’t after any additional acclaim or awards with this record, for they aren’t in need of anything the industry has to offer. What they truly prize are the people that are around them, and they just wanted to make music with (and for) their friends once again.

‘Water From The Well’ has hints of early Pink Floyd in the guitar riff, but when the lyrics kick in, the song soars ahead about a decade, although still sounding decidedly retro compared to most glossy pop songs of the moment. ‘Talk About Lonesome’ sounds like a front-porch hootenanny, and flows well into the pensive beauty of ‘Leave That Light On’, which forms a sturdy, stirring centerpiece for the entire album.

The second half of the record drags just a bit based on the similar nature of the songs, which get bogged down by the derivative quality of the material; and fails to differentiate itself much from anything we’ve yet heard from Beachwood Sparks. That doesn’t mean it’s not without several high points, including the touching, tender ‘Nature’s Light’, the Ariel Pink-assisted refinement of ‘Earl Jean’, and the affectionate album closer ‘Goodbye.’

But the Spanish-sung, Calexico-echoing ‘No Queremos Oro’, (“We Do Not Want Gold”) is a jarring slip-up that sounds out of place compared to the unhurried pace of the other tracks, while ‘Alone Together’ is so plodding and sedate that it fails to connect at all. But those missteps are thankfully quite rare on an album that coheres rather majestically in the end, especially for a band who have been out of the game for as long as they have.

Rather than returning to fortuitously reclaim some of the attention generated by this sudden return to the past which seems to have overtaken much of the music industry, or getting back together for a blatant cash grab that is so in vogue now, Beachwood Sparks instead chose to make another tasteful addition to their dignified catalogue with a collection of songs that enhance rather than tarnish their small but stately legacy. If everything which is old is now new again, then let us all grow old as gracefully as The Tarnished Gold.

Listen to The Tarnished Gold