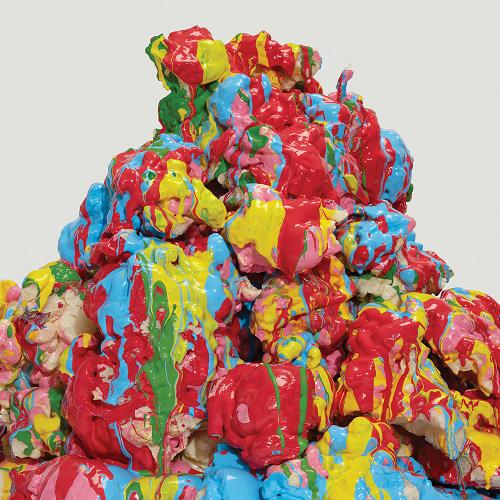 Remixing a group as consistently inventive and idiosyncratic as Battles can be both a blessing and a curse. The experimental New York outfit have pushed their sonic parameters so far out there that anyone remixing their material can confidently take plenty of risks in deconstructing their unconventional sound. But that freedom might also be their undoing, for any artist who refashions Battles’ songs run the risk of having their reworked material pale in comparison with the radical original work.

In the case of Dross Glop, a collection of 12 remixes of each of the tracks from the band’s’ rousing second record, Gloss Drop, both potential scenarios enliven as well as plague the release, with some mixes building on the solid foundation of the source material, while others end up merely coming across as weak interpretations of the fresh originals.

Gui Boratto’s moody, dirty-disco take on ‘Wall Street’ opens the album positively, injecting a bit of a triumphant Rocky-esque theme into the track’s more jubilant moments. But that momentum grinds to a halt during The Field’s somnolent twist on ‘Sweetie & Shag’, stripping the urgent churn of the original and replacing it with a numbing drone that stretches on for far too long, and which also drags down Silent Servant’s tepid mix of ‘Inchworm.’ The Alchemist’s agitated take on ‘Futura’ has moments of innovation, but sticks too close to the source to be all that memorable.

Shabazz Palaces, on the other hand, successfully inject their laid back hip-hop spirit into ‘White Electric,’ turning the riotous rhythms of the original into a relaxed but restless Northwest banger. Kode9 removes much of John Stanier’s dynamic drums which pulsed at the fitful heart of ‘Africastle’, and turns the track into a more restrained, tension-filled dubstep jam that partially works, but ultimately doesn’t venture far enough away from Battles’ own version to be truly memorable.

Kangding Ray expands on the brief transition number ‘Toddler,’ and gives the track an added breadth and scope, as well as an ominous mood that wasn’t present on the Gloss Drop version. But again, on ‘Dominican Fade,’ Qluster remove much of Stanier’s drums to get at something far more ethereal, and thus also remove one of the signature aspects of Battles untamed sound – a far too frequent occurrence on Dross Glop. Gang Gang Dance’s Brian DeGraw strips away most of the unbridled energy of ‘Ice Cream,’ and replaces it with a jaunty, videogame-like beat that grows more comical and less effective as the track drags on.

Hudson Mohawke builds a celebratory, circus-like atmosphere around the synthy steel drums featured in ‘Rolls Bayce’, crafting a truly jubilant song that only complements the dynamic spirit of the original. LCD Soundsystem drummer Patrick Mahoney and producer Dennis McNany turn the roiling rhythms of ‘My Machines’ into something far more upbeat and much less menacing, while still featuring Gary Numan’s robotic vocals prominently in their buoyant mix.

By the time Boredoms’ Yamantaka Eye reworks ‘Sundome’, the wild track he was featured in on Gloss Drop, listeners might start to wonder (if they hadn’t done so earlier) why they bothered listening to the remix versions when the unorthodox originals are often far superior to the restyled renditions featured on Dross Glop. This uneven collection might occasionally complement the experimental source material, but it was never going to be much of a substitute for the ingenious musical stylings of Battles themselves.