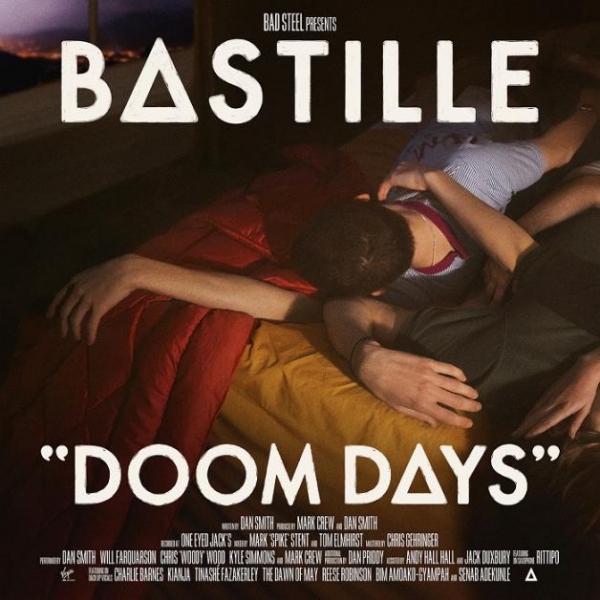 After nine years and three studio albums, everything we’ve come to expect from Bastille is – for the most part – set in stone

You know that they deliver massive hooks. You know what Dan Smith’s voice sounds like, having heard it on their numerous hits and last year’s megahit collaboration with Marshmello (“Happier”), and you know he loves to turn one syllable into four. You know that if they were angry Americans, they would be Imagine Dragons.

You would imagine, given the amount of shit they get from music reviewers, that they (like Coldplay) were the worst, most vanilla group of nothings that a record company A&R man ever wet-dreamed about. But all it takes is a look below the surface, and there are some things you can enjoy about Bastille, even if you’ve never taken the time to try before.

Doom Days, their third alliteratively-titled album, has some moments that make you reconsider the notion – should you harbour such an idea – that Bastille are simply electro Mumfords, posers straddling the world with posh accents and carefully curated stage uniforms. Because while that is still mostly true, there are redeeming qualities to Bastille that hide behind the vacuum-packed layers of sterile pop.

This is, consciously and thankfully, a more upbeat beast than the previous two records, with Smith mentioning in recent interviews that he thinks of this record as a ‘blue pill’ album, one that provides for immediate escapism. So it’s fitting that the record opens with “Quarter Past Midnight”, which throws out references to taxis and Joy Division. It has a carefree, charged spirit and a couple of huge hooks in there for good measure.

From there we got to “Bad Decisions”, a double-entendre about poor choices on a night out paired with the Brexit outcome: “feeling lower than the sterling”. It’s lightweight and musically anodyne, but the lyrics are enough to raise a smirk. “The Waves” follows, with its electro-soul flourishes and right-now pop production punching through the haze. The piano ballad “Divide” slightly confounds the mission statement of the record by being both downbeat and another rumination on politics, but it doesn’t qualify as a misstep. It’s actually rather lovely.

“Million Pieces” is solid – if slightly underdone – modern house, and it becomes one of the best, most most memorable cuts on the record, if only for its resemblance to a large portion of the Top 40. The title track is, bizarrely, a blend of acoustic guitars, trap-inflected rapping and references to Dorian Gray. It’s hard, especially when listening to songs like this one, to think of how well Bastille’s albums will age, especially with more references to Brexit: “We’ll be the proud remainers / Here ’til the morning breaks us.”

“Nocturnal Creatures” is far and away the best thing on here, primarily because it’s the least predictable track: wobbly Radiohead-esque soundscapes are refracted through the prism of 2019’s charts, reconstructed with the better tools from Bastille’s kit. Much like the time of the morning it’s named after, nothing really happens during the song “4AM”... it’s actually one of the lesser selections in Bastille’s canon, and probably the only stinker on the record.

Calling this the best Bastille album is, to some folks, faint praise. But Doom Days is almost certainly exactly that. This feels somehow lower-key (less in-your-face) than the other two, and it feels much more cohesive as a result. It’s just a shame that Bastille find themselves in the kind of artistic no-man's-land that one can only imagine millions of pounds remedies: They’re popular amongst people that don’t listen to full albums, and have a sound that fits practically any TV soundtrack, festival bill or playlist they’re included on. But that, for most folks, is simply not enough to warrant further exploration by the people that have the most invested in music.

Dan Smith has, for years now, always told anyone that will listen that his favourite thing ever is David Lynch’s iconoclastic TV Rorschach test, Twin Peaks. Hell, Bastille even named a song after Laura Palmer, a girl whose death causes the whole mystery to begin. Twin Peaks is notoriously difficult, obtuse, and it’s largely incomprehensible, and this quality is what fans love about it: It’s a private members club, a place where only the initiated receive maximum enjoyment. Put simply, you get out exactly what you put in. This, however, is precisely the main problem with Doom Days: the more you put into it, the less you get out.