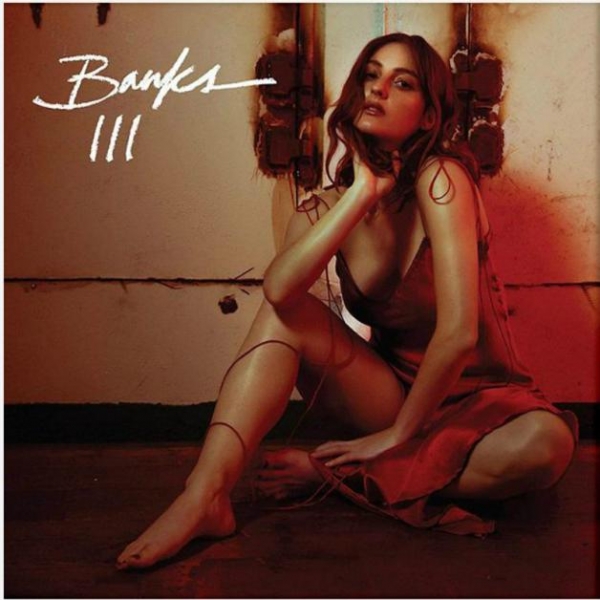 From Goddess to The Altar, LA musician Banks is back with her third installment.

The number three is prominent and recurrent within this record. This is Jillian Banks’ new chapter, and she has something to share with us all.

Album opener “Till Now” is a punch to the gut – in a good way. “I saw you outside, wearing the shirt that I gave you to remember me by,” Banks sings, immediately opening the record in a vulnerable space. As she says in a recent interview: “I went through something pretty painful, and that was me announcing ‘I’m done with it.” What makes this opening track so powerful is quite simple: Banks means it with every fibre of her being. This strength can be hard to find in music, but with III we get it right from the beginning. “Till Now” is a song everyone can all relate to, but we also feel Banks’ own pain as an individual within the short two-and-a-half minutes.

The record continues to surprise with its tracklisting. Lead single “Gimme” fits perfectly as the second slice of III – it’s the third that catches you off guard. Already, Banks presents us with a slow ballad. At first glance, it’s a track that can make the listener feel unsure, and could even be viewed as one to skip. After a few listens, its unlikely third placement is what makes it all the more compelling – “And I wish I could change it and we’re always gonna be contaminated.” Banks leaves us without a choice other than to acknowledge the brutality of broken relationships. We can’t fix them, and Banks doesn’t find a resolution in the course of this record. Where previous albums provided full resolution through tracks such as”‘Under The Table” and “To The Hilt”, BANKS strays from this conventionality on III, presenting it as something to embrace.

It can be difficult not to make direct comparisons to older works, particularly as Banks likes to remind the listener of what came before – and not always very subtly. The Altar, Banks’ second record, referenced her debut album title in “Trainwreck”, whilst “Godless” – track five on III – is clearly inspired by the Goddess album. A song half-written by her ex, Banks chose to finish it herself and put it on her album – a bandwagon possibly not worth jumping on.

In spite of this criticism, III has many more strengths than weaknesses. “Sawzall”, another ballad, sees Banks pleading to a lover, hoping for some sort of resolution. The inclusion of a sample of a child (Banks’ niece) saying ‘I’m sorry’ gives a haunting yet warm feel to the track as the song wraps around itself in heartache. The inclusion of this recording repeated creates an eerie feel, which is welcomed alongside the high-camp lyrics. Here, Banks is poetic in multiple definitions of the word, creating something which compliments the LP as a whole and sticks as one of the stand-out tracks.

Whilst “The Fall” is a classic Banks pop bop, “Alaska” and “Hawaiian Mazes” sit comfortably within the alternative R&B genre that the singer has found herself in since the beginning of her career. If you’re looking for further moody yet dancey anthems, then “Propaganda” will be a go-to track, with Banks singing “I can’t save myself, I might need help.” The themes of melodramatic and pleading lyrics found elsewhere on III continue in this track, yet they are cushioned by upbeat electronics that can’t help but make you move a few limbs. What Banks does here is what she does best; something she should cherish and continue to embrace as more records come.

The final two tracks of III, “Made of Water” and “What About Love” border on forgettable: these are the types of ballads we’ve heard from Banks before. While this record is a deeply personal one, that’s no reason to give these tracks a free pass to disappoint. The shorter of the two tracks – “Made of Water” – could benefit as the album's final installment, rather than leaving it as the penultimate song.

Overall, Banks has taken a step forward in her development as an artist, and you can hear this increase in maturity across each album. At times, her evolution is not as convincing as other artists on her level, though the quality of the songwriting here generally makes up for that. III is the sound of an artist solidifying her already concrete career and becoming a musician ready to take over the world.