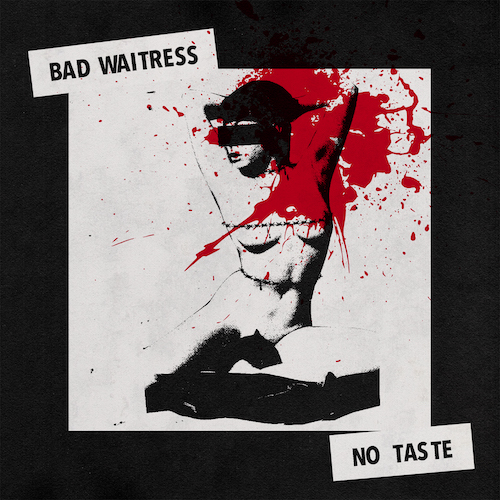 From that simple goal came their stellar (and accurately titled) Party Bangers EP, which quickly confirmed them as a ferocious new voice on the punk scene. Now, with newly adventurous musicality, caustic bite, and winking attitude, the band’s growth has culminated with the release of their new album.

No Taste deftly side steps any hint of pigeon-holing for the band, moving quickly through a grab-bag of punk-adjacent styles and tones over it’s short runtime. “Rabbit Hole” ratchets up the tension from the record’s opening moments, letting the strained and wiry post-punk guitar lines hit a fever pitch before the band dives into a sludgely climax. The band immediately follows with the swaggering cool of “Yeah Yeah Yeah,” raging energy of “Lacerate,” and Runaways-style chants of “Strawberry Milkshake.”

As the record goes on the band continues to visit punk touchstones. Bits of Sonic Youth’s abstract soundscapes show up, accompanied by intricate Fugazi-esque rhythmic interplay, and piercing, sneering attitude. The strength of the record immediately lies in the way the band synthesizes these influences, along with a dose of their own renegade instincts. Surprisingly enough, the band cite jazz as an inspiration, one that’s less immediately obvious, but shows up in the band’s freewheeling instrumental approach. The band aims for unconventional new distortions with the obtuse and angular breakdowns of “Delusions of Grandeur” and the ghostly tone of “Restless Body,” reportedly created with a beer bottle on the neck of Kali-Ann Butala’s guitar.

Despite hints towards more abstract inspirations, though, No Taste’s core lies in spikey, no-frills punk, delivered via a healthy mix of pitch-perfect derision and single-minded conviction. At its best, the results are intoxicating. As bassist Nicole Cain explains, “I get really anxious, but I feel powerful when I listen to this album, like I’m fucking untouchable. It’s basically a self-defense album.” Even in the few moments of weak songwriting or flagging energy, the band sounds powerful and unapologetic. Bad Waitress revels in that power, fusing wiry punk thrills, tangled interlocking instrumentals, and alluring acerbic charms with their debut.