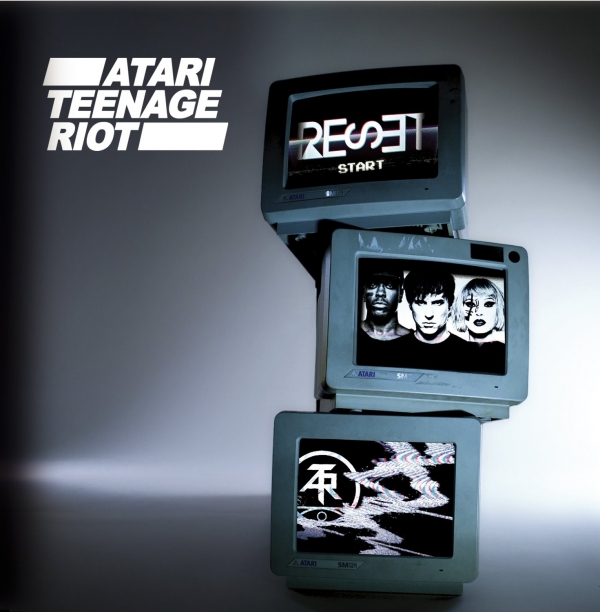 Now with their teenage years most assuredly behind them, Atari Teenage Riot are back with a fifth studio album. The band – founded by Alec Empire, Hanin Elias and Carl Crack way back in 1992 when the internet was just an academic curiosity and the members of Anonymous were in short pants – continue to be an enigmatic, confounding mass of sloganeering cyberpunk and activist angst. After a difficult and uncertain period in the musical wilderness, marked by the death of Crack and the departure of Elias, 2010’s Is This Hyperreal? was a furious, impatient, cathartic detonation that split critics and reintroduced ATR to the world of the digital quotidian. Now, from the depths of that renascent fissure, comes Reset. It’s a record with an inquisitive spirit and a strong sonic coherence, and one that will no doubt delight fans but baffle and frustrate others in equal measure.

The line-up of the group has reset itself once more, and in place of CX KiDTRONiK, previously on the mic for ...Hyperreal?, the trio now includes British MC Rowdy Superstar (a onetime comrade of Patrick Wolf, for whose 2009 album The Bachelor Empire lent a producer’s hand). He, Empire and Endo trade respective punchy verses, proclamations and ecstatic hooks in a tight and composed way that functions well throughout the album. Nic Endo is in the form of her life, not only in her programming duties but in delivering her lines with an icy cool, almost synthetic precision, pitched perfectly amidst mashing sludge chords and boom clap beats. It’s a shame, then, when on paper some of those lyrics don’t quite attest to the gravity of their intention: “When haters make shit up that is not true/They justify their hate because they cannot attack you otherwise” she advises on "Street Grime".

Album opener "J1M1" announces itself with a pumping chiptune rock trill, and the three vocalists run the gamut of the record’s narrative themes: government surveillance, state violence, media repression, and righteous resistance. If the best kind of revolution is constant revolution then ATR have learned from …Hyperreal? that an expansion of their sound is the best accompaniment to a fortification of their politics. The evil majorettes’ march of a refrain that punctures "J1M1" adds an invigorating euphoria to the customary digital hardcore offering.

This setup finds an ideal outlet in "Modern Liars", a powerhouse of rolling big-beats and revving 808s hijacked by the most beautifully sinister interludes in which Endo declares “If you want it all, you can have it/If you want it all, just take it!”. The language and form of consumerist compulsion bursts in amongst Empire’s various calls to rise up, satirising hyper-technological capitalism’s promise of instant gratification. The looping, erring siren synth gives the lie, and the same trick is used on enormous album closer "We Are From The Internet", this time rendered absurd and downright chilling by shouted repetition. In the midst of all this, the sampled crowd noises seem an odd, anachronistic intrusion: don’t they know that in the world of the digital revolutionary there are no cheering crowds, no large gatherings of people; only onion routing, ergonomic keyboards, and empty cans of energy drink?

The problem with the Atari Teenage Riot of 2015 is that their unselfconscious sincerity might be mistaken for a quaint naivety. The band whose songs were deemed worthy of government-imposed age restriction in early 2000s Germany (admittedly not the most damning of state interventions) might reasonably be asked whether they can still deliver creative insurrection, and whether their art can still pose a challenge to that against which it has defined itself. "Erase Your Face" is a highlight of the record, a Frankenstein’s laboratory of fathomless, phantasmal beats and digitised vocal multiplicities dripping off one another. It’s a treatise on omnipotent surveillance and the corrosion of the notional public/private boundary, suggesting that the best survival tactic is the creation of a composite “half life/half truth” anti-identity. This is the closest that Reset gets to the preeminent idea of the revolutionary mensch-maschine that Kraftwerk were interrogating more than 35 years ago, and Empire is no more Ralf Hütter than Russell Brand is Michel Foucault. There's plenty of radical thought in plain-spoken discussions about the mundane structural oppressions that permeate our interactions with one another, and revolution doesn't have to arrive wearing a Guy Fawkes mask, shouting through a megaphone.

It’s hard to dislike Atari Teenage Riot, or not be drawn in some way to the endearing simplicity of hormone-fuelled rebellion. There’s a lot of fun to be had throughout Reset, not least in the uptempo "New Blood", with its screwing riff evocative of "Midi Junkies" and its wacky Mortal Kombat-style breakdown. Rowdy Superstar provides an evocative spoken intro to "Transducer", a punky behemoth with a flatulent bass, a copy-paste beat from …Hyperreal?’s "Codebreaker" and yet more whirling, ectoplasmic synths in its latter half. As danceable distillations of internet activist subcultures go, Reset is an enjoyable 42 minutes of dystopian aphorism and boasts more dense textures and a keener ear for juxtaposition than its predecessor. It's a definite progression; just don't expect it to tear down the firewalls of GCHQ any time soon.