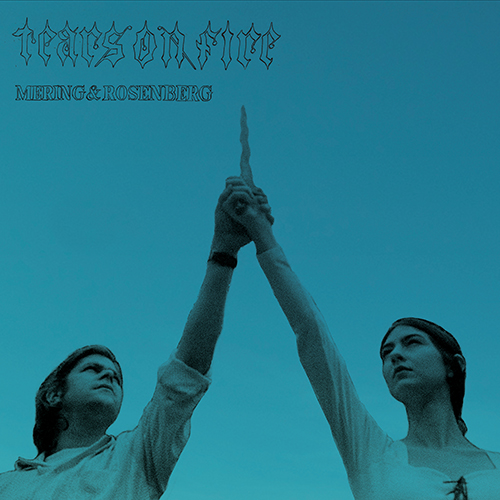 This collaboration between Ariel Pink and Weyes Blood began back in March 2016 when the two shared a musical residency within the small desert city of Marfa, Texas, and has resulted in a four song EP rich with character.

Ariel Pink may primarily be known for crafting stylized and psychedelically-touched pop, with Weyes Blood's offerings more cosmic folk orientated, but these US West Coast-based creatives have a past that has previously intertwined, with Mering having appeared as a vocalist on Pink's 2013 album Mature Themes. It should be a given that their coming together bears a result equally steeped in both of their past musical outpourings.

Opener "Tears On Fire" may have a touch of Elvis Costello-style vocals within its heavily folk-led pop grooves, but there's an alternating nature to proceeedings that sees it jump into brief, dense choral prog sections before reverting back to shallower ground. Elsewhere, "Daddy Give A Little Time To Me" is a slow paced vocally operatic reworking of the song by 60s girl group The Sisters, whilst "Morning After" is a shuffling, downbeat stab at haunting and minimal folk. Closing track "On Another Day" is a live recording of a song originally by 80s British goth band Sad Lovers and Giants - featuring both Connan Mockasin and Andrew Van Wyngarden of MGMT, it's a near five minute, slow footed take on down beat melodic pop.

More than a curio but not quite essential, Myths 002 will not drastically change perceptions of either artist involved, but is another commendable display of their lack of fear when it comes to exploring new ways of working.