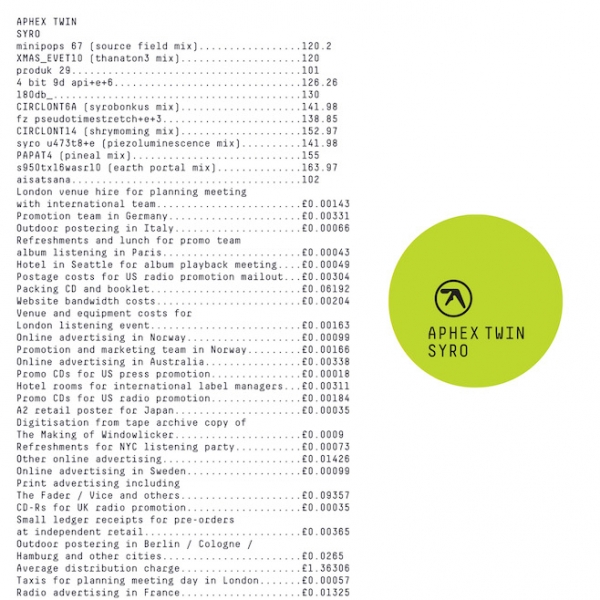 So much has happened to electronic music since Drukqs, Richard James’ last full-length under the Aphex Twin moniker, was released 13 years ago. From the portentous rumblings of the bassy underground to the dizzying, garish territory at the top of the charts, the electronic music landscape is, if not unrecognisable from its state in 2001, certainly far wider, more nuanced and varied than ever before. So, as James returns to the fold with Syro, a question is raised – what impact will the return of modern music’s great pioneers have on the genre (and countless subgenres) over which his previous output casts such a long shadow?

Well, where to start? From its outset, Syro feels pretty monumental. As soon as the record churns into action with “minipops 67 [source field mix]”, trademark Aphex atmospherics cascading over jittering, restless percussion, the listener is transported into a totally ethereal sonic space that could be constructed by nobody other than James. Throughout its considerable duration (64 minutes), the album explores this space, manipulating its shape and boundaries. As each track morphs, often imperceptibly, into the next, it’s difficult to avoid feeling a little disorientated. Countless themes and motifs constantly shift in and out of focus, yet each sound is absolutely essential, placed in exactly the right corner of this intense, shimmering aural canvas. It can be tricky to keep up, to remember previous passages after a couple of the dozens of sharp left-turns that the record takes, but it never really feels like you miss anything. Each and every moment of the record has enough depth and detail to allow the listener to get utterly – and willingly – lost.

There’s little here that is entirely new territory for Aphex Twin; the beats crackle and writhe like much of the percussion on Drukqs (although nothing here is quite as aggressive as the any of that album’s more abrasive tracks), and the some of the more ambient passages could quite easily fit into some of his earlier releases. However, it is clear that Syro has not been made in complete isolation, sheltered from the modern electro world. Several passages are very Burial-esque, others nod to Jon Hopkins. Of course, these are producers whose output includes lots of Aphex-y ideas, played around with and updated for more modern audiences – it’s interesting to see him return the favour.

As much as anything in Aphex Twin’s back catalogue, Syro is an incredibly cohesive, immersive listen. If it doesn’t quite include as many groundbreaking ideas as some of his earlier releases, this (relative) lack of innovation is more than made up for by the sheer quality of the music. In some ways, the more familiar feel of this album actually enhances the listening experience – this truly is a record to get completely lost in, reluctant to emerge for days on end. On repeated listens, more layers become audible, more snatches of melody and beauty breaking through the dense, rhythmic canopy. The impact that this album has may not be as revolutionary as that of Selected Ambient Works 85-92 or Windowlicker, but it will certainly send a message across the world of electronic music – Richard D. James is back, and he’s still absolutely untouchable.