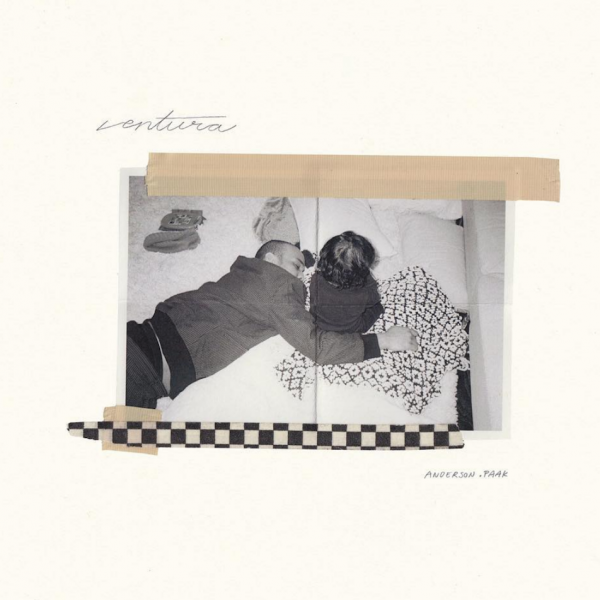 This time last year, the South Cali virtuoso announced his new album Oxnard stood in front of a colossal yellow billboard, firing dollar bills into the air whilst lit by roving spotlights. Single “Bubblin” may not have ended up on the record, but its video pre-empted a new era of .Paak: gone was the lavish, surf-washed R&B of Malibu and the wavy disco of Venice. With his first release on Dr Dre's Aftermath, .Paak was to reborn as a stone-cold baller, with everything – the swagger, the womanising, the audacity – turned up louder than ever.

This new suit fitted reasonably well: Oxnard was a solid attempt at a 'proper rap album'. But, in earnest, some of the (literal and sonic) romance of .Paak's previous work got a bit lost. From even the barest of listens to Ventura, I wonder if he may have known this: just five months later, and here is an album that, despite being recorded in the same sessions as Oxnard, feels modest by comparison, and vastly more accomplished in both its emotional core and musicality.

A lot of this has to do with the thick, retro sound Ventura invests in: an evolution of the Isaac Hayes-esque funk-soul .Paak has previously flirted with. Each ensemble – a foundation of drums and live bass (oh, the bass), with brass and close-knit BVs – sways together like palms. The album opens with a flourish of drum fills and jazz flute, before dropping in on the buttery groove of “Come Home”, .Paak reaching out to a lover who's one foot out the door. We're blessed with an unsurprisingly show-stealing feature from Andre 3000, his incandescent, everything-rhymes wordplay (“We fightin' / We might need counselling / Possibly more me so it / Sounds to me / Frowns will be / Grounds to leave / Hounds will be / Looking for you”) a thrilling contrast to the loose, sepia-toned backdrop. It speaks to .Paak's pulling power that he was able to coax the increasingly reclusive emcee out from the ether.

From here on in, the high bar is smacked again and again. .Paak and Smokey Robinson (yup) kick it delightfully old school on “Make It Better”, a decidedly PG-13 love song about reigniting the flame of a dimming relationship. You'll struggle to find a better bass line written this year than the slap-sliding riffs of “Chosen One”. Here, .Paak and his production team showcase their ability to throw everything at the wall and somehow make it all stick: punctuation is provided by heavily chorused guitars, .Paak and Sonyae Elise's backing vocals are soaked in delays and phasers, and the mid-section makes a devilish backbeat from just claps and bouncing piano. So much attention has been paid to the way things tesselate – it's genuinely interesting, and it also makes you want to throw off your smart-casuals and moonwalk out of your office/house/train carriage.

.Paak doesn't rap much on Ventura, but when he does, you'll need to sit down. On “Winner's Circle” – a secure-your-neck head-bobber – the ensemble breathes as one, a phat core of drums and bass flanked by be-doo-boo scat vocals. At the two-minute mark, a huge tom rips through the mix and introduces possibly the best bars of .Paak's career: his double-time is whip-lash fast, stamped with that inimitable sauce (“Bring her home and I'mma bust it out the residence / When I get the kushy I get dumb like the President.”). There are also moments of pure pop brilliance: the Brandy collab “Jet Black”, with its lux disco and easy, singalong refrain (“Hands above us / Feels like someone lifting me”) is destined to be spilling out of picnic speakers come June.

Given his unquestionable artistry, it would be especially unfair to deny .Paak the ability to move on from his previous work. But the strength of Ventura is best framed in contrast to the weaknesses of its predecessor. On Oxnard, .Paak's confidence felt barbed, arrogant even. His expressions of sexuality were clumsy – the mega-smooth cut “Head Low” was still a blow job song, with a gruesome bit of foley at the end. And stylistically, the album was disjointed, absent of a cohesive treatment and chasing a contemporary rap sound that didn't always play to .Paak's innate soul.

Ventura overturns all these failings. With sumptuous harmonies and a live band locked in on every track, .Paak finds a sweet spot between throwback soul and the 21st Century dancefloor. He sounds like the best version of himself: still a lovable rogue, but a little more focused, a little less brash. Speaking in a recent interview, producer Focus, who worked with Dr Dre on Ventura, said that .Paak's true audience 'would understand this album'. He was almost certainly right: it marks an exceptional return to form.