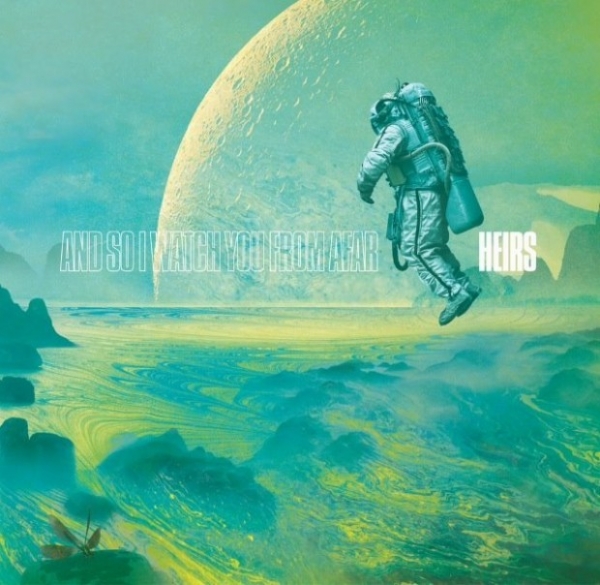 Group chants, warped guitar shreds, and a seemingly incessant furious energy. Sound familiar? For fans of Belfast’s And So I Watch You From Afar, this should resonate loudly; have no fear, the quartet shows no signs of changing, as is clear from forthcoming release Heirs. Written in isolation over half a year, their fourth full-length is quintessential ASIWYFA, and perhaps a little too much for its own good.

At ten tracks long, Heirs has been carefully whittled down and selected from thirty tracks recorded in preparation for the album in the band’s Northern Ireland home. Unfortunately, as the record begins and finds its feet, there is a sense that perhaps the best were not chosen. Opening tracks “Run Home” and “These Secret Kings I Know” sound so familiar that I have to check that I am actually listening to the latest release. It’s not so much that a new release must necessarily show progression or a huge divergence from the sound that earned them acclaim in the first instance, but it feels that the intertwining micro-genres of post-rock and math-rock have long been saturated by samey formulas - hackneyed rhythm changes, overdependent clean/distorted contrasts - and these songs seem to reinforce this, regardless of their clout and technical panache.

It is with some irony, then, that a track titled “Redesigned A Million Times Before” thankfully acts as a tipping point and it is from hereafter where ASIWYFA prove why they remain champions of their genre. Happy but cutting guitars layer on top of each other to create a backdrop for a beautiful pop melody in a way not dissimilar to the likes of Tubelord and Dananananaykroyd. It’s happy as always - this band are a big fan of the major key - but it has a heartwarming quality to it that can often be absent in ASIWYFA’s songwriting.

Other highlights include “People Not Sleeping” which is fast and fun and executes the band’s ceaseless affinity to the ‘epic’ in a simple, driving manner; it’s different and very effective. What’s more, the production of the record is perfectly suited to the band’s live sound, not least in “Fucking Lifer”, which is ridiculously punchy. In contrast, the prettiest track by far is the album’s twinkly closer, “Tryer, You”, which chooses not to exude quite as much of the band’s usual force, although is not so delicate to not include a characteristically ASIWYFA dramatic ending.

Heirs, as its name implies, is all about the passing of influence and adaptation. Whilst there are fragmented glimpses of influence peppered throughout, the record remains very true to And So I Watch You From Afar’s sound; too much at the beginning, but brilliantly later on. Indeed, as difficult as it may have been to cut thirty tracks down to ten, they would have done better to cut down just a touch more.