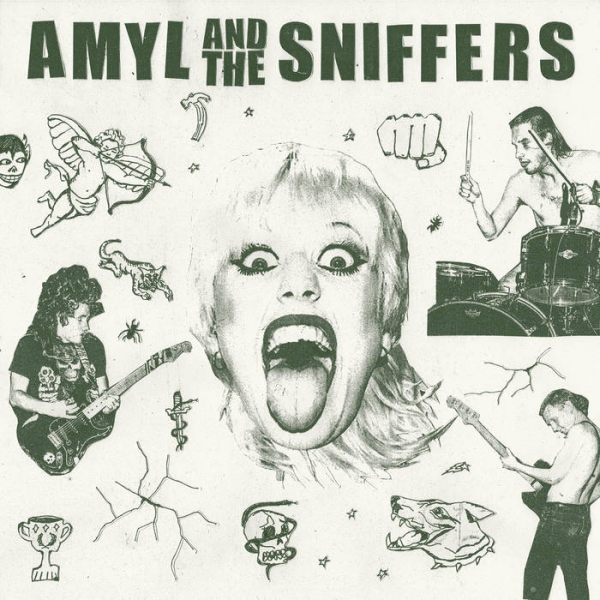 The opening 1 minute and 50 seconds of Amyl and The Sniffers’ debut LP is a bombardment of garagey, punk rock thrash – complete with a piercing, face-melter of a solo.

Declan Martens’s guitar bites and lashes, Gus Romer’s bass rumbles and quakes, and Bryce Wilson’s drums smash and pummel. And once Amy Taylor enters the fray, with her sneering, barbed baying, the intimidation factor goes through the roof. It’s a blistering, raw, commanding introduction to Melbourne’s latest export in a long line of exciting new bands.

Or, re-introduction, it should be said. The foursome released their debut EP Giddy Up in 2016, and it was as punk rock as anything has ever been, and not just in its vicious, whiplash sound. The band wrote it, recorded it, and put it out in a mere 12 hours, testament to the DIY spirit Amyl and The Sniffers fervently embody. Their follow-up EP a year later, Big Attractions, marked them as just that: this was a band that made you take notice.

Now, they’ve found a fitting home at Rough Trade, and this time round, they’ve spent a good amount of time in a proper studio, with reputed producer Ross Orton behind the desk – who oversaw sessions for Arctic Monkeys’ AM – and they’ve come out the other side with a debut that rips and tears with a whole lot more force. The band hasn’t lost any of its wildness, any of its chaotic energy, though it does feel like they’ve gone through a bit of development: they’re now a full-sized, frothing rottweiler, instead of the growling pitbull pup they were just a few years ago.

And while the guitar, bass and drums cause a raucous stir on their own, it’s singer Amy Taylor that makes the band the vicious animal that it is. Her bratty, feral attitude is infectious, and it’s the very fuel for the fire that burns so raging hot at the centre of the Sniffers’ sound. She seethes, spits and snarls her way through the 29 minutes of the album, which fly by at an exhilarating, breakneck speed. Taylor vents about being “stressed about money” and “bend[ing] over backwards all day” for people, and proudly, defiantly, with two fingers up in the air declares, “I’m a freak, it gives me pleasure”. It’s nothing ground breaking, but it’s compelling, because Taylor is just that magnetically intense and zoned in.

The last three years has seen Amyl and The Sniffers go from playing in sweaty little rooms at impromptu gigs in Melbourne to being signed by one of the world’s most respected indie labels – supporting fellow Aussies King Gizzard and the Lizard Wizard in the US and packing out London venues along the way. It’s been a hell of a ride so far for these incendiary Aussie punks but it’s far from over. “You just try and stop us”, Taylor says in savage lead single “Monsoon Rock”. Not a chance.