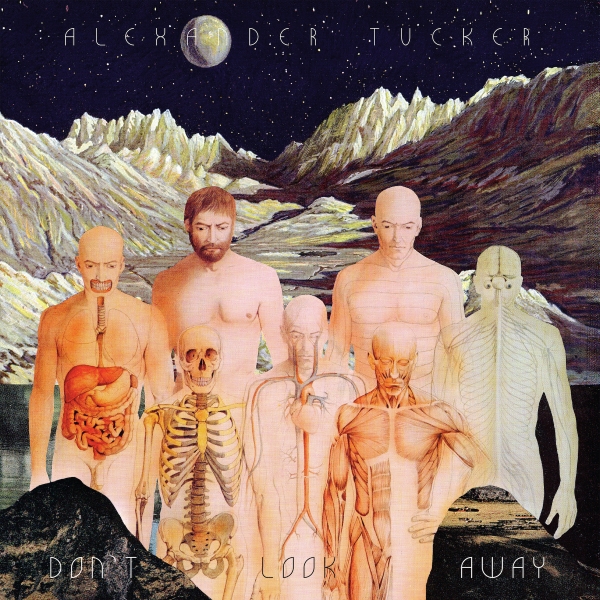 The latest album from Alexander Tucker, one half of the London duo Grumbling Fur, completes what Tucker considers a trilogy with his two previous solo outings, Dorwytch from 2011 and Third Mouth from 2012. Don’t Look Away may be in some ways the most pared down of the three, but it is also the most polished and refined.

Grumbling Fur have often gotten themselves into enriching collaborations with a range of other artists, including This Heat’s Charles Bullen and Bardo Pond’s Isobel Sollenberger on Furfour, their most recent album. This journey, however, is one that Tucker takes largely on his own, save for a few contributions such as Factory Floor’s Nik Void lending vocals to “Gloops Void (Give It Up)”, and Fur-mate Daniel O’Sullivan contributing viola to “Visiting Again” and supplementary vocals to “Behind the Shoulder”, as well as sharing the album’s mixing duties. This does not leave Tucker sounding isolated or vulnerable (and that’s not just down to the multi-tracking of his vocals and zooming in on the guitar and keys), but freely moving, calmly unguarded, campfire warm.

A visual artist as well as a musician, seemingly keen on science fiction imagery with a psychedelic edge, Tucker has at least a couple of things in common with Calgary artist Chad VanGaalen, and Don’t Look Away at times operates in similar ways to recent VanGaalen albums Shrink Dust and Light Information. But the line between fictionalized future and hallucinatory memory in Tucker’s lyrics is more porous. For every dimensional image (“Does it really matter that you were made by men / Organic computers thinking wide again / Does it really matter / We never really spoke again,” recalls “Sisters and Me”) there is a vapor of allusion, a line that may be about what it seems on the surface, or may be about something underneath. “It’s another way that you hide away / The honest ray / Disguised as a beam of light from the week before / Visiting again,” Tucker sings in the compactly glowing “Visiting Again,” a crack appearing in reality but not in his voice.

If the album’s mind is fixed on a future world, it is an open-ended one. The tendency at this point might be to assume that all imagined futures are dystopian, but the spirit of Don’t Look Away and the sum of the pictures and story fragments Tucker has strung together in the record are reflected in its title: the good, the bad, the beauty, the fear...don’t look away from any of it.