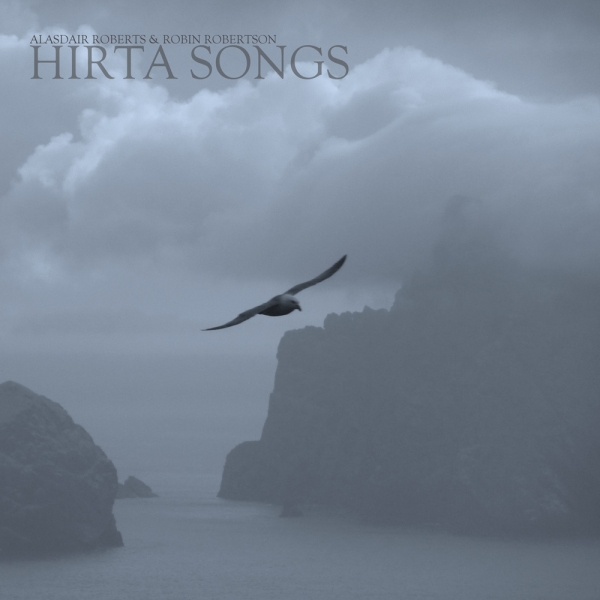 Named for the largest island of the St Kilda archipelago, Alasdair Roberts’ collaboration with the poet Robin Robertson comprises a sequence of songs and stanzas inspired by a landscape uninhabited but teeming with life. Together, their output is not a static portrait or enhanced image of pretty fiction, but an album formed and informed by unromantic, unflinching detail, all nature’s vividness a product of monochrome amorality.

Roberts is an established creator of corporeal, tactile songs – specific histories told with permeating permanence – for whom the natural world has long been a trope. On Hirta Songs it is evoked with precision in Robertson’s chiselled words, which Roberts sets to Gaelic melodies to mesmeric and timeless effect.

“Leaving St Kilda”, one of two tracks to feature the Perthshire poet as orator, is both poem and tour; plain-spoken but dense with detail. It towers like a stack through nine minutes of expressive description and sharply wrought imagery. Robertson’s rugged depiction of Stac Lee and its gannetry, “From one side a bishop’s piece, from another, a shark; / All sides inches deep with guano you can smell for miles / A stone hive of gannets, thrumming and ticking / With the machinery of sixty thousand squalling birds”… is a particular zenith, harpist Corrina Hewat plucking gentle accompaniment all the while.

The poem’s emigration isn’t freeze-framed; rather a freeform naturalistic portrayal of a living landscape, and the significance of the journey deepens in the context of the album’s concluding track. ‘Exodus’ dwells upon the last moments of Hirta’s human habitation, softly but insistently, ritualistically climactic. A sense of inevitability infects the air as pulses turn to echoes via a cadence of lament (“We drowned our dogs with heavy rocks, and gave them up to water’s trust / Candles burned in every home, our Bibles opened up at Exodus”).

Dates and details flicker as a living past is rendered raw again, time a lesser force than truth. This does not preclude a sprinkling of mysticism, the supernatural a fellow and foil to the natural world. “The Plain of Spells” takes comfort in assorted herbal remedies, while islanders go “to open up the other world within the holy stones”. “Farewell to the Fowler” is loaded with organic menace, bridging the mortal and immortal, a suicide’s body “buoyed up by the ghosts of birds”. Robertson’s words empathise with his protagonists, stitching them into the fabric of the ecosystem, the place as it remains, so that St Kilda today is still defined by St Kilda of these songs.

Between times, Hewat contributes serenely to two immutable instrumentals where sun flexes and sea ripples. For the most part, though, the album is set in the teeth of wind and weather, undulant tunes under lyrics like volcanic rocks. Roberts has a gift for siting songs – the spindly and spirited alike – in their own space, and St Kilda is not abused as a concept. Instead, mortality and humanity are the driving ideas, and the islands a framework and playground for the exploration of beings and endings. The stark conclusion is transcendent: “We are all surefooted / But we fall”.