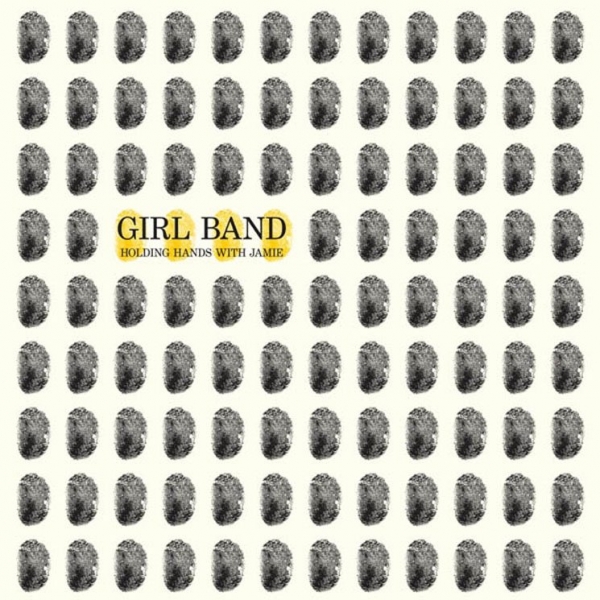 Louis Wain painted cats. While those four words may seem incongruous in relation to Dublin noise-mongers Girl Band, there is a point.

Examining Wain’s cats, one can see them becoming increasingly vivid, psychedelic and even threatening as his schizophrenia worsened. His mental health controlled his art. On Holding Hands With Jamie, Girl Band have gloriously laid to record lead singer Dara Kiely’s struggles with psychotic depression. In turn, they have made one of the great debuts of the year.

In an interview with the NME, Kiely laid bare the inspiration for the nine experimental and violent tracks on Holding Hands With Jamie - the subtext of which orbits and retells the mental health consequences of an emotionally devastating break-up. From frantic, tongue-twisting lyrical outbursts to hypnotically feral instrumentation, the compositions meander to mirror a mind moving between mania, psychosis and depression.

Littered throughout the record are musical and lyrical reference points to Kiely’s mental health. “The Witch Doctor”’s hyper-speed vocal delivery, threatening bassline and insistent drum beat, for example, mimics the relentless energy and flight of ideas associated with bouts of mania. “Texting An Alien”, a drawling spoken word interlude seemingly recollects Kiely’s delusions/hallucinations. Furthermore, the unhinged “The Last Riddler” makes overt references to atypical antipsychotic olanzapine - “olanzapine take once a night” - and an awkward initial meeting with a Dr. Murray.

“The Last Riddler” oddly serves as rest-bite to several of the monolithic and labarythine compositions that are found on Holding Hands with Jamie. Reminiscent of “Heckle The Frames” and “The Cha Cha Cha”, its explosive power is presented as exactly that - an explosion, a singular moment. By the end of the sub-two minute burst of fury and energy, Kiely’s vocal transforms into guttural, unintelligible screams that battle thrashed stabs of instrumentation. “The Last Riddler” plays foil within a record that continuously flirts with frightful tension and toys with an audience locked inside a sonic pressure cooker of the band’s design.

“Paul”, the lead single and centre-piece of Girl Band’s debut, is a behemoth of dynamic intensity. Its looping bass groove and distorted guitars heighten before rousing the listener with shrill tones and unrelenting attack. At its peak, Girl Band command with vice-like grip, as drum-rolls signal wave after wave of attack. The tension and subsequent profitable release, which Girl Band have so masterfully achieved is greatly indebted to the constructs they have used to design their monstrous structures. Heavily influenced by the repetition of techno, Girl Band use their traditional instrumentation almost like samplers on a 16-step loop. With the aid of pedals, they design and mould zero-note, no-wave sounds into something astonishingly rhythmical. Piecing these abrasive samples together and subsequently repeating them beguiles their audience, before attacking unexpectedly with sharp teeth and blissful abandon.

Whilst “Paul” builds in a relatively linear fashion to its cataclysmic wall of sound, Girl Band are consistently chameleon with their approach to song-writing on Holding Hands With Jamie. Tracks never directly follow a trajectory in the way that lead single “Paul” showcases. “Fucking Butter” pirouettes between an unholy racket of razor-blade guitars and rolling toms before enveloping itself with dark, megaphone vocals and a lazy bassline, as guitars screech to breaking point. “Pears For Lunch”, on the other hand, is the closest to traditional “pop” songwriting one is likely to find on Holding Hands With Jamie, with its instantly scream-able hook, “I can eat your pears for lunch”.

This approach to songwriting makes Girl Band an extremely playful unit - one full of giddy and petrifying surprises. Album opener “Umbungo”, for one, plays on the listener’s expectations of what a Girl Band debut should or would sound like. As Kiely’s vocal appears, what we have presented is a feeble, almost pathetic vocal rather than the larynx-irritating vocal screams associated with the four-piece. “Baloo” furthermore features a (king of the) swing, scratched guitar-line unlike anything found within their other output.

Their playfulness also extends into the lyrical realm, with the likes of the humorous and self-deprecating, “I look crap with my shirt off” and “Spend my time watching Top Gear with my trousers down” on “Pears For Lunch”; or even the brief cuckoo imitation Kiely hides within the climatic screams of “The Witch Doctor”. For every moment of aghast caused by the brutality of the sound they conjure, there is another, which will make one chuckle, or at least, crack a smile.

On occasions within their debut, Girl Band stretch their idiosyncratic sound near to the point of avulsion. On “Umbungo”, a pulsing guitar line marks a dissociation of instrumentation and arrangements, as each member voyages upon a stormy tangent. Its sound is reminiscent to the rack - the form of medieval torture designed to dislocate the major joints of a victim’s body. The music, crucially, never fully avulses into an unpleasant mess and only tears, allowing for an exhilarating sonic experience. The production by the band themselves appreciates this tipping point and thus allows clarity and unity to the seemingly (on face-value) disparate arrangements. Furthermore, the production captures the raucous energy of Girl Band’s live shows remarkably well.

As fun as “Baloo” is, it slightly misses the mark. Although its aggression is maximised with the introduction of Adam Faulkner’s drums, it repeats an idea, which unfortunately loses its novelty by the third minute. “In Plastic”, the closest Girl Band will ever come to writing a ballad with its swooning guitar line, is also more of an under-developed idea, rather than a fully-formed song to be appreciated.

It would not be hyperbolic to state that there are very few bands (if any) currently like Girl Band. With their debut they have, for the most part, broken metaphysical barriers between techno, noise and punk, and presented a record beaming with youthful exuberance, and containing a frightening level of intensity. The presented fruits of their labour, inspired by Kiely’s breakdown, are resounding. Potentially one of the record’s greatest successes is that it moves away from numerous mental health stereotypes. Never does it fall into cliche and fights stigmatisation with a positive, humorous and creative ethos. Girl Band’s debut is a ferocious monument to Kiely’s experiences - one to file near and hold in the same esteem as Wain’s cats.