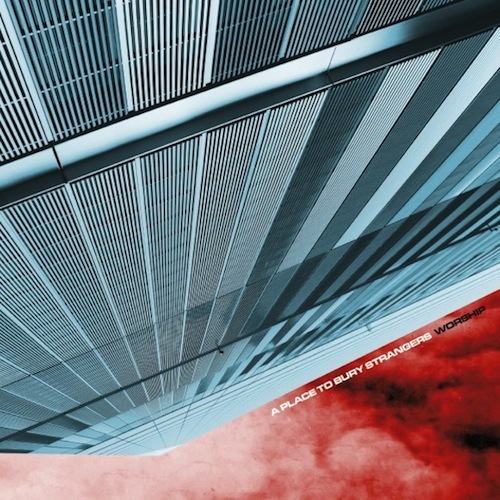 First things first: for some bands, volume is everything. Just three short years ago, this hack caught one of A Place To Bury Strangers’ live shows, and incredible as it was, frankly I’m lucky that my ears still work at all. There comes a point when things cease to be mere “loud music” and turn into incapacitating torrents of dense, scarcely comprehensible sound. It’s so physically and mentally draining that you’re practically swimming to stay afloat amidst the crashing waves, almost tangible as they seem to be. And you betcha fucking life it’s exhilarating, so it’s no coincidence that the band’s records are similarly noisy. There’s an interesting question to be raised about this: why blow your audience’s ears out if you want them to carry on listening? Hey, Kevin Shields, J Mascis – any answers? No? Okay then, let’s see if APTBS’ third album Worship gives us any clues.

The propulsive beat that kicks off the album is vaguely reminiscent of Big Black, which might give you a few ideas about where this New York trio fit into the post-punk lineage. Sure, ‘Alone’ lacks the instant abrasiveness of Steve Albini’s former crew, but the simultaneous energy and machine gun precision suggest more than a few wasted nights huffing gas to the strains of Atomiser. And that’s not all in the way of reference points either. There are snatches of proto-alt-rock for all the family: a dab of Peter Hook bass-strumming here, a smidgeon of Jesus and Mary Chain murmurs there, all topped off with a light dusting of The Cure. “So fucking what?” you ask. “We’ve heard all this before. Isn’t this how landfill indie got started?” Well… yeh, but there’s ripping off Joy Division (OHAI, Editors) and then there’s assimilating their influence to shape something new. Sure, they cover old ground, but only to map out a sonic territory that’s all their own.

The mood here is best described as “foreboding”. Let’s check the song titles for a kick-off: ‘Alone’, ‘Fear’, ‘Why I Can’t Cry Anymore’, ‘Revenge’… not exactly ‘Shiny Happy People’, is it? That’s mirrored in the miasmic tones of singer Oliver Ackermann, growling “I’ve got to get it together/I’m losing sleep over here” like a man fully aware that he’s losing the plot, and really pissed off about it.

It all comes amidst strafes of white noise and freakish sonic wizardry – let’s not forget that Ackermann founded Death By Audio, the guitar pedal company that furnishes Wilco and Lightning Bolt with their gear. Highlight ‘Dissolved’ presents five minutes of zoned-out, Disintegration-esque dreampop, with guitars rushing past your ears like arctic winds; cold, impassive and relentless. Halfway through, it stops suddenly and restarts as a miserabilist jangle, like some philosophy undergrads who’d never actually heard Beach Fossils but thought they’d got the gist.

So that’s how the album goes, but what does it actually do? Well, predictably, it fucks with your hearing. Some guitar lines are shrill enough to make you grateful for crappy iPod earphones and their shitty limitations. Maximum volume for maximum enjoyment, natch, but if you wanna know how your sense of balance is gonna cope with some of these sonic extremities at full blast, try spending an afternoon in your washing machine.

Metal is often described as seething, but metal doesn’t seethe. It roars, it grunts, it screams. This seethes. It feels claustrophobic. And not in the same way that, say, Japandroids’ first album wrapped its euphoric pop core in layers of cheap fuzz – this is more deliberate than that. It feels angry, tense, frightened; a knot of terror twisted inside its gut; the existential fury of being trapped inside the endless mundanity of the day-to-day whilst staring at the rotting corpse of your own hope. The only way it knows how to channel that is through pure volume. And that is what makes this band so exhilarating – not the reference points, not the sheer fact of its loudness, but the intensity of its nervous energy and the way the band react to it. Worship? Not quite, but it’s pretty easy to adore it.