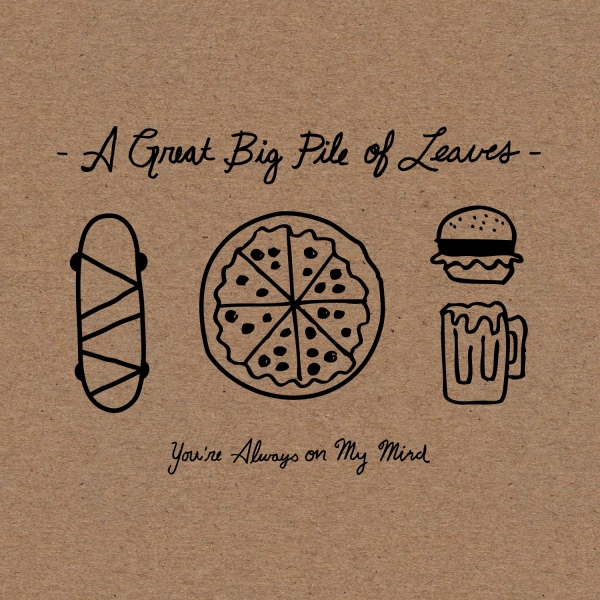 Brace yourself – we’re delving into the seriously independent side alternative music in the US. A Great Big Pile Of Leaves are a band on Boston’s hyper-independent Topshelf Records, belonging to a scene wherein every act with any traction has a following so devoted, so endlessly turned on by them, that they get tattoos of their lyrics, collect all the beautiful limited edition LPs, know every last word to every last song and belt those words along at their shows en masse.

Actually though, even within that scene, we’re talking about something very special, and everybody who’s uncovered the secret knows it; A Great Big Pile of Leaves are a unique band. Topshelf, a pretty unique label themselves with a very solid following, are largely flush with some pretty superb emo bands – and believe it or not, A Great Big Pile of Leaves isn’t actually even nearly the longest name on their roster. Despite being nestled in a scene full of bands nodding in varying degrees to Cap’n Jazz, though, A Great Big Pile of Leaves are a very, very different act. Think of your favourite childhood poems, your all-time favourite comfort foods, dozing off in afternoon sunlight, the greatest party you’ve ever been to, and belly-laughing with someone you’re head-over-heels in love with; that’s the very soul of the band, and intrinsically of their second album, You’re Always on My Mind.

How apt a name for an album that is, on one level, built of such pure pop that its melodies continue to ring around your head relentlessly from its start to its finish – and likely well into the next day – and on another is so impressive in both its musical components and production that you really can’t help but keep coming back to it in slight disbelief. These are the two key aspects of A Great Big Pile of Leaves that make up their unique selling point, though – the combination of fun music and technically-brilliant music – and it’s true from the first cooed seconds of the delightful opening track ‘Snack Attack’, with its perfect, crisp instrumentation and hugely satisfying hooks. You’re Always on My Mind isn’t another regurgitation of the old reliable chord sequences of the pop world, but a humble collection of songs that have been been crafted with love and care, and with the enjoyment of both the writers and listeners in mind. Every track is indicative of the scope of the band’s ability. ‘Ambiversion’, for example, which fluctuates between marvelously grand unison melody and superbly catchy riffs beneath the chorus, is a superb contrast to ‘Fun in the Sun’, with its delightful introducing lyric “Been keeping cool by thinking about swimming pools” and building blocks of catchy drums, intricate guitars and a vibrant dose of vocal camaraderie. There’s next to no wasted space on the record, either – if there’s a tune, a drum fill, a sprinkling of lead guitar or a snatch of vocal harmonies to be fitted into the mix, it’s fitted perfectly; as a tailored suit to its wearer. A feeling of community is intrinsic to the band’s appeal – tales of their live shows being stuff of legend in certain circles. ‘Pet Mouse’, a song essentially about becoming friendly with the mouse that inhabits a new apartment (how can you not smile?), is fast-paced, comparatively heavy and full of the euphoric, comradely high that their debut LP (Have You Seen my Prefrontal Cortex?) climaxed at with ‘A Few Screws Loose’. As it has always been, the ‘Great Big’ in the band’s name has been justified once again on this album by the great big sing-along melodies they write so incredibly well.

To say that fun is ‘what this band are about’, though, is to sell them as something they aren’t (as well as a fairly nauseating sentence). No, it’s more like they’re about the celebration of simple personal enjoyment over wallowing in personal bad feelings; about utilising a love for music and cherry-picking the best things in life to make art that makes you feel great. It’s also wonderfully, intrinsically unpretentious – it’s been so since their first small releases, through their debut LP and up to now – in a time in which so much alternative music is bloated with pretentiousness. Heck, the closing track, ‘Pizzanomics’ features a chorus wherein many voices sing “I just love pizza so much” – we can get on board with that.

On paper, you’d think this was all rather irritating, but no; it feels as though it’s understood that what the band are doing with You’re Always on My Mind is not putting on an annoyingly optimistic face that makes you roll your eyes but warmly reminding you that there are things in life to be happy about – even if life does have the capacity to be pretty crappy sometimes – and achieving it in a way very few bands have managed. It’s somewhat beyond comprehension that their unique remedy to feeling down in the dumps hasn’t broken in the UK yet, but believe us when we say that this is an album, and a band, that deserves your full attention.