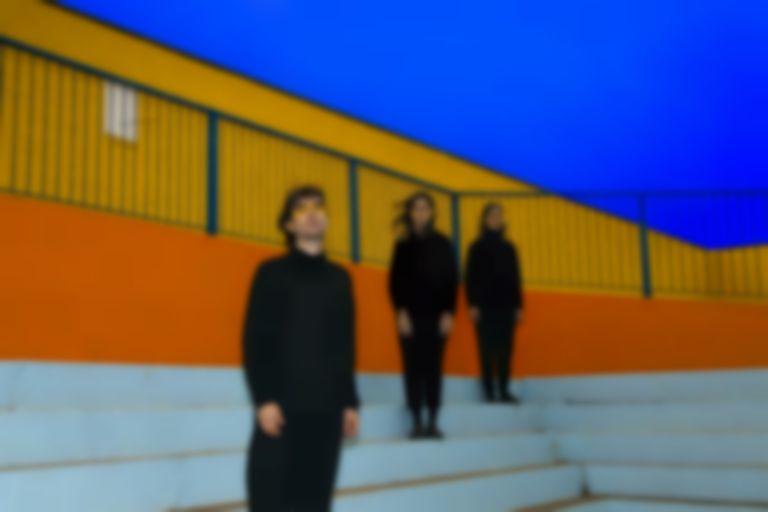 London three-piece Wovoka Gentle previewed songs from their upcoming album Start Clanging Cymbals at Omeara last night as part of a special Yucatan Records showcase. Lucky fans were treated not only to an enchanting and intimate gig, but also a sneaky insight into the material from their much-anticipated debut LP.

This rare trio of extremely talented multi-instrumentalists consists of twins Imogen and Ellie Mason and William J Stokes, and since 2015 they've been building up an impressive back catalogue as well as developing a powerful live show. Between 2015 and 2016, Wovoka Gentle released a string of three EPs through Yucatan Records and signed with Nude Records in early 2018, before announcing the details of their debut last month.

From the moment they take to the stage, the band are up to their elbows in equipment, surrounding themselves with a whole host of synthesisers, samplers, drum machines and effects units - as well as an expensive-looking guitar collection. Opening with a cover of "30 Century Man" in tribute to Scott Walker (whose death was announced only hours earlier and was described by the band as one of their great influences), Wovoka Gentle’s set is short but fascinating.

Their new songs are more of a departure from their indie/folk-leaning early material, and they see their sound continue to shift in a more electronic direction, incorporating elements of neo-psychedelia and indietronica. Their use of squelching synths, watertight harmonies and playful, effect-laden vocals results in a sound very similar to that of Animal Collective's Merriweather Post Pavilion or Panda Bear's Person Pitch - a similarity emphasised by the Noah Lennox-esque qualities in Stokes' voice. Their latest single, "Sin Is Crouching at Your Door" is both the heaviest and best received moment of the night, truly brought to life with its raw blues guitar riffing, droning violin loops and thumping, stripped back beat. It makes for a thrilling conclusion to the night.

Even though they’ve been with us for a while now, we are still yet to learn a lot about Wovoka Gentle - although we at least know to expect the unexpected. They refuse to be pinned down and, based on tonight's performance, Start Clanging Cymbals looks set to be a very promising release.

Start Clanging Cymbals is out on 7th June on Nude Records, and will be celebrated with a launch party at Corsica Studios on 5th June.