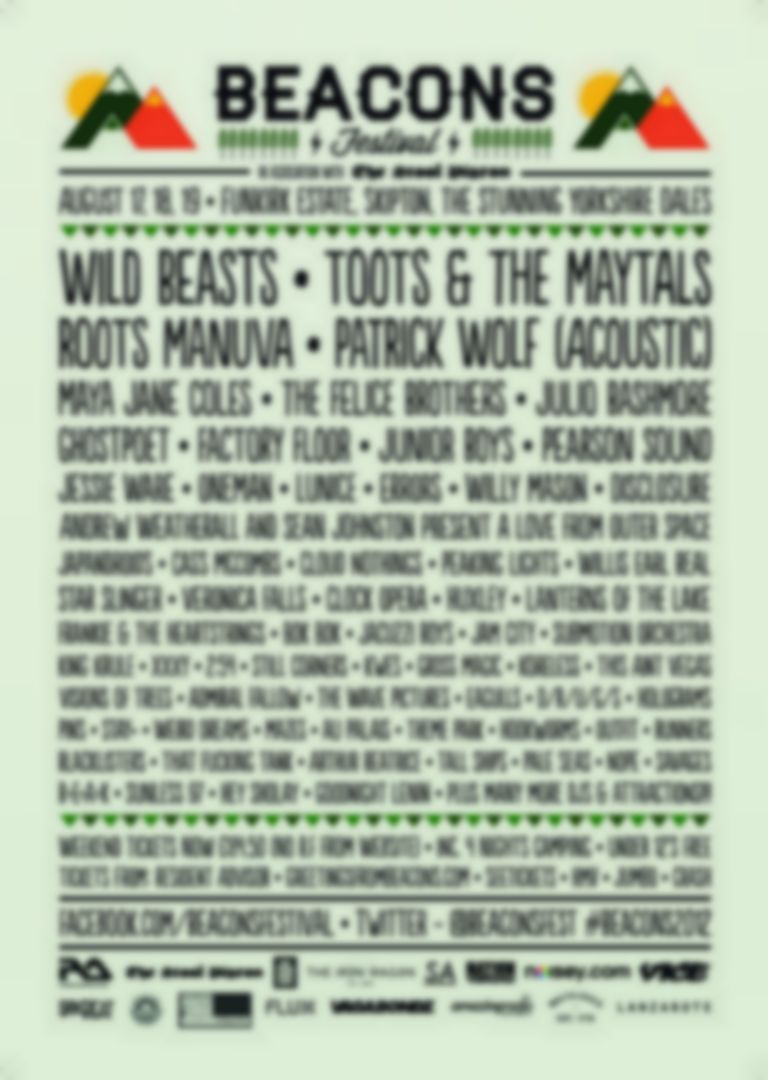 The pressure is notably high for Beacons Festival this year: last year’s unexpected flash floods led to a last-minute cancellation, making 2012 Beacons’ ‘proper’ inaugural year, having previously been known as ‘Moor Music Festival’ before it was absorbed into the Eat Your Own Ears festival dynasty. But delivering shouldn’t be a problem. Situated on the beautiful Skipton Moorside in the heart of the Yorkshire Dales, the festival boasts one of the most stunning settings around. And with a line-up that is equally impressive, hopefully the festival will teach the many southern attendees that maybe the north isn’t so grim after all.

There’s plenty on offer besides the stellar line-up, too. The copious amount of attractions should affirm the festival as a kind of Glastonbury of the North, with forest talks and workshops, art installations and bizarre theatrics (including the beguiling ‘Impossible Lecture: 72 Hours of Curated Chaos’) ensuring a captivating weekend even if you don’t see any music. But ultimately with a bill like this, why would you want do that? The headliners are amongst the most interesting names to grace any festival this year, with Roots Manuva, local heroes Wild Beasts, and Reggae legends Toots & the Maytals letting their diverse idiosyncrasies shape the festival.

Beyond the headliners, the rest of the weekend shows the hands of sensitive curators. Following the pattern set at sister festival Field Day, there is an interesting mix of electronic and guitar music (two irritatingly vague umbrella terms for you there), Beacons provides a lot of music worth being excited about. While Mount Kimbie’s minimal bass, the technophilic house of Julio Bashmore and the blissed-out D/R/U/G/S trance will make mud-sliding boogying a guarantee; there is (relative) peace to be found in the twee revivalism of Veronica Falls or the hook-laden groove of Theme Park. And for those that don’t feel there is enough of an onslaught on offer, there’s always Factory Floor’s oppressive industrialism or the squalid punk of Holograms. Not a bad range for just one day, eh?

Saturday kicks off with the contrasting electronic experimentalism of Kwes followed by the eerily romantic folk of Cass McCombs, turning your Saturday afternoon into a real head-scratcher. Later on, the beats are provided low-frequency bright star, Pearson Sound, and Junior Boys, whose remix of ‘The Fun Powder Plot’ makes them the perfect support for Wild Beasts.

Perhaps the most diverse proceedings are left until the Sunday, as the day begins with the spirit of troubadours, the fascinating lo-fi soul and blues of Willis Earl Beal giving way to the contemplative folk of Willy Mason. Patrick Wolf, who should need no introduction, and The Felice Brothers’ dusty Americana are probably the most berserk segue into headliners Toots & the Maytalls possible, but the Beacons have gone ahead and done it anyway.

Bringing the weekend to a close on the other stages, Maya Jane Coles shows us why her productions have earned near-unanimous acclaim, and Cloud Nothings let their frenetic and noisy sentimentalism close the proceedings at the Noisey/Vice stage. The marvellous Souljazz Soundsystems will spin a mammoth set from their eclectic collection, an end to the weekend that should not be missed.

The festival calendar may already be quite bloated, but the addition of Beacons should not be frowned upon, as the boutique weekend seems to possess a thoughtfulness missing from other weekends – let’s just hope it goes off without a hitch this time around.