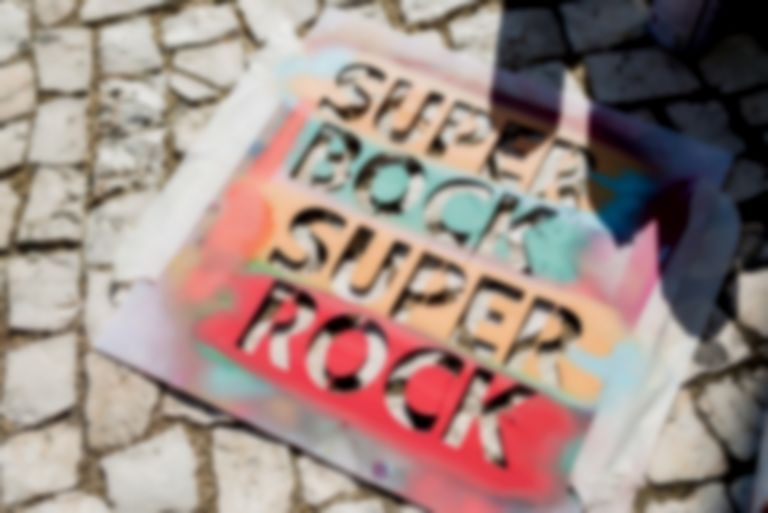 There’s a breezy, balmy revolution at the heart of Lisbon’s creative scene, and art instigators Underdogs are at the helm

The Portuguese capital city has recently come under the spotlight as a cultural crossroads for traveling artists, curious expats, and long-standing locals alike; the ten-piece team is harnessing the creative energy and channeling it into a broad palette of public art programs. Most recently, the organization has teamed up with Super Bock Super Rock Festival for the third year in a row to bring a taste of the city’s street art scene to the iconic music festival. What’s on this year’s agenda? The group is bringing graphic designer, writer and provocateur Wasted Rita as well as scene-stealing urban artist Catarina Glam to their on-site open air gallery, where Gonçalo Ribeiro (aka Mar) will be holding introduction to graffiti workshops as well for those itching to join in the action.

The tight-knit team behind Underdogs has grown exponentially since its inception in 2010 as the passion project of visual artist Alexandre Farto (aka Vhils). We caught up with Gallery Manager Diana Sousa for a quick chat about the Underdogs' earlier days, current collaborations and plans for the future ahead of Super Bock Super Rock.

Best Fit: It looks like Underdogs has a three-pronged approach: It operates as an art gallery, a public art programme and as a producer for art editions. What is the backstory behind the organisation, and how has the organisation changed and grown over the past 8 years?

Diana Sousa: Underdogs is the brainchild of visual artist Alexandre Farto aka Vhils. He first set it up in 2010 as a cultural platform working with emerging urban artists in Lisbon, with the aim of giving something back to the scene and the city he had come from. Together with his Lisbon gallerist, Vera Cortês, he put together a group show titled “Underdogs” which was the first exhibition in a contemporary art gallery in Portugal that presented the work of artists who – up until then – had been creating primarily in the streets. Despite its success, the project was then put on hold as Vhils was living in London at the time and doing lot of travelling. In 2012, Vhils teamed up with Pauline Foessel, who was then managing the Magda Danysz Gallery in Shanghai, and both of them decided to move to Lisbon with the goal of reviving and restructuring the project in order to establish something unique in the city.

For us, Underdogs is more than simply a business model, we truly care about and believe in the artists we work with and try to support them as best we can so they can focus on creating amazing art. We also love the city we live in, so the objective is to establish living synergies between these artists and the city – really helping to turn art into an everyday experience.

Who are or who is Underdogs? Who is on the team, who does what, and how does the organization work on a day-to-day basis?

Underdogs is a cultural platform based in Lisbon working with talented contemporary visual artists inspired by the urban environment. The project rests on what we see as three complementary areas: a gallery showcasing Portuguese and foreign artists – both established and emerging talents – who are invited to visit and work in Lisbon; the production of original and affordable artist editions; and a Public Art Programme that promotes art in the city as a public service. We also run Underdogs Art Store, our city-centre outlet that sells editions, original artworks and other products in addition to organising our street art guided tours service as well as workshops and other events for the public.

What is the role of "urban/street art" – or public art – in Lisbon, and how has that changed in recent years?

Lisbon seems to be currently the vanguard of the global scene. Things are thriving here, and both the city authorities and its citizens have truly embraced this new form of public art. The City Council has been following an innovative and very pragmatic approach to urban art since 2008 with the aim of trying to curb the issue of illegal graffiti while promoting what the public at large might perceive as works of a more artistic nature. As such, we've been working closely with the Council since 2013 within the scope of our Public Art Programme, and it's thanks to this special partnership that we've been able to do such great things. There are quite a few artists to have emerged from the Lisbon street scene who are leaving a mark in cities around the world – we feel lucky to work with them.

What can you tell us about Underdog's activities at Super Bock Super Rock this year? What can visitors expect, and what should they be sure not to miss?

Music is the main dish at the festival, so we've tried to complement the musical events with something that can connects with the overarching theme. This year, we've invited the ever-unique Wasted Rita, who has a long history of creating brilliant music-inspired artwork, and who will be creating a series of original pieces that will be showcased at a new open-air gallery space within the festival. We've also invited the multi-talented artist Glam, who creates these amazing crafty sculptural installation works – she will also be producing an original music-inspired work for the festival. The open-air gallery is also where we'll be holding a few introductory workshops on graffiti run by the renowned graffiti writer and visual artist Mar, which has proven to be one of the most sought-after and successful side events at the festival.

Lisbon is quickly becoming an international hub, especially for young creatives and artists from around the world. What effect has the city's position as a new cultural crossroads had on the city's art scene?

We believe that in recent years Lisbon has been earning its rightful place on the global map. It's a vibrant city with plenty to offer, and as you pointed out it has become home to a very dynamic cultural scene. More people equals more public, more artists and more creativity. It's a dynamic spiral of growth and interaction.

In terms of urban-inspired art, there has been a significant increase on all levels – of interest by the public, of support by the city council, and also the emergence of new artists working in this field that are making their names both in Portugal and abroad. The entire city (citizens, council and visitors alike) has fully embraced the new public art that has been transforming its landscapes over the last few years. The city is the perfect blend between ancient and modern; it’s scenically beautiful and the weather’s great. We think it's the perfect location to enjoy both life and art in its fullest.

What can the international art scene learn from Lisbon's artists, curators, and creatives?

Why not come to Lisbon and find out first-hand?

Super Bock Super Rock kicks off today and runs through to Saturday. Find out more at superbocksuperrock.pt.